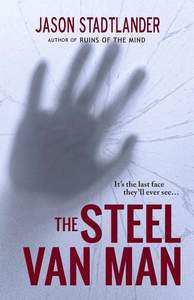 Peabody, Mass., September 29, 2017 – Jason Stadtlander, author of the fiction anthology Ruins of the Mind, will be holding his book release and book signing on Friday, October 6, 2017 from 6 pm to 8 pm at the Barnes & Noble in the North Shore Mall in Peabody, MA.

Stadtlander’s fiction thriller, The Steel Van Man (published by BHC Press) is centered in the small Massachusetts town of Swampscott, just north of Boston, where a serial killer hunts select victims. Detective Stanley Devonshire who is joined by his long-time friend Marblehead Detective Mark Brown, Massachusetts State Police officer Joyce Chase and an imposing federal agent who are uncovering a trail of evidence in an attempt to determine exactly how the killer has managed to continue on a horrific rampage undiscovered for what appears to be almost a century now and with the exact same pattern.

The Steel Van Man has the reader holding his breath and postulating at every turn as the book weaves a story of murder, secrets revealed, and justice sought. The reader is driven in an uncomfortable direction he might prefer to avoid.

Stadtlander will be available for autographed copies of The Steel Van Man on Friday, October 6, 2017 from 6 PM to 8 PM at Barnes & Noble at North Shore Mall (210 Andover Street, Peabody, MA). It is highly recommended that visitors pre-order your book so it is available for the book signing by contacting Barnes & Noble at (978) 573-3261.