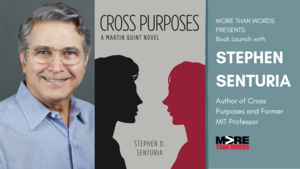 Professor Martin Quint and his wife Jenny have moved to Brimfield Junction, Maine, where Martin teaches at Bottlesworth College. Summer is coming, and Martin is about to start his groundbreaking book on the essential role of live conversation in education. But life intervenes, not just the ordinary work-family challenges, but intrusions from all sides, especially a shocking revelation from Martin’s past that threatens to careen everything out of control.

Senturia spent 36 years as Professor of Electrical Engineering at the Massachusetts Institute of
Technology. He is the author of three prominent textbooks, several hundred scientific papers,
several dozen patents, and he was elected to the National Academy of Engineering in 2003. Now
retired from technology, he has found a new life in reinterpreting his academic experiences
through his novels. Cross Purposes is the sequel to his first novel, One Man’s Purpose, which is
set at the fictional Cambridge Technology Institute, a look-alike for MIT. It was the events in
that book that led Martin to move to Bottlesworth, where Cross Purposes takes up his story.

Praise for One Man’s Purpose:

“A stunning first novel” – Peter Strauss, Colombia University
“Who would have thought that a tenure case can make a page turner,” – Sam
Gutmann, Northeastern University
“If you want an entertaining and accurate picture of what it’s like to be on the faculty
of a high powered research university, read this book” – Ora Smith, Academic
Executive Recruiter

Senturia is especially pleased to offer this reading at More Than Words, an organization that
addresses critical societal issues in a compassionate and constructive way.