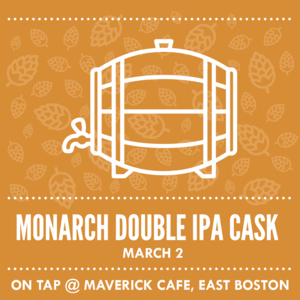 Love cask beer? Us too! This beer is sold out in the taproom already, but there's one cask sittin' at Maverick Cafe in Eastie waiting to get in your belly!

Cheese Pairing: Harbison.
Food Pairing: Hanger steak with melted blue cheese all over it.
Music Pairing (Jimbo's Choice): "The Hammer" by Dethklok
Music Pairing (Jared's Choice): "Winter Reggae" by the Red Elvises
Best Occasion to Drink: As the wind is howling outside in the dead of winter and you're hunkered down somewhere warm tryin' to remind yourself that it'll be warm again soon enough.

Brewer's Notes: As this is our fiftieth batch, we wanted to do something with a nod towards our first-ever batch, only bigger and better.* So we gathered up a figurative ton of Empire Malt, a moderately huge amount of Andrew's Honey, an impractically large amount of hops, and unleashed hell upon our brewing system! The end result is simultaneously dry and fruity, with just the slightest underlying hint of honey; we advise you to grab some while you can, since this beer ain't gonna stick around too long!

* We didn't want to brew that beer again, since a) we wanted to symbolically show how far we've come by brewing a bigger/better beer, and 2) that first brewday was a goddamned disaster and it would be quite hard to replicate the resulting beer.