Bolshoi Ballet: The Taming of the Shrew 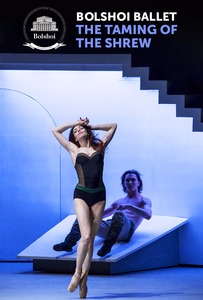 On November 19, Fathom Events is bringing The Taming of the Shrew to theatres nationwide! Baptista struggles to marry off his tempestuous daughter Katharina, a shrew who denies that any man could possibly be her match. However when she meets Petruchio, who is as ill-tempered as she, the two forces of nature ignite an unexpected and explosive encounter. Acclaimed choreographer Jean-Christophe Maillot brings out the wit, fast-paced athleticism and vibrancy from the Bolshoi Ballet dancers in Shakespeare’s rowdy comedy. Principals Ekaterina Krysanova and Vladislav Lantratov clash, challenge and eventually give themselves to one another in a wonderfully entertaining production that can only be seen at the Bolshoi!