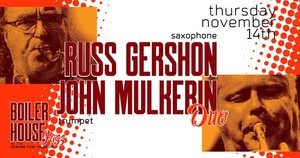 Where:
https://www.eventbrite.com/e/boiler-house-jazz-concert-russ-gershon-and-john-mulkerin-duo-tickets-72263400777?ref=ecal Charles River Museum of Industry & Innovation
154 Moody St. (museum is set back from the street, follow the footpath along the Charles)
Waltham, MA 02453

Mulkerin and Gershon grew up in adjacent towns in Connecticut, and began playing together in 1976, among a coterie of young players influenced by Ornette Coleman, Sam Rivers, John Coltrane et al. Although they haven’t lived in the same area since 1977, they have played together regularly since, often in a funk or rock setting.

Tonight’s program represents a new chapter, as the two horn players will go at without rhythm section, but drawing on their multi-instrumental skills, electronics and their studio experience.

RUSS GERSHON
https://www.facebook.com/russ.gershon.1
Russ Gershon has been a force on the Boston music scene for almost 40 years, from early days on the rock scene with the Sex Execs to decades of international touring with his ten-piece Either/Orchestra to today’s assortment of projects including his Trio and the Latin Bugalu band Lookie Lookie.
https://www.youtube.com/user/Russgershon