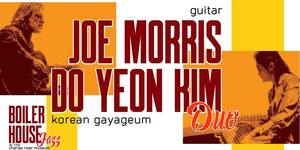 Where:
https://www.charlesrivermuseum.org/events-list/2019/3/14/boiler-house-jazz-joe-morrisdo-yeon-kim-duo Charles River Museum of Industry & Innovation
154 Moody St. (museum is set back from the street, follow the footpath along the Charles)
Waltham, MA 02453

It is with great pleasure to have the Boiler House Jazz Spring 2019 season opening event be with two incredible musicians from two very different geographical birthplaces. New England native Joe Morris, a highly respected guitarist/improvisor/educator will perform with the Korean born Do Yeon Kim, a masterful performer on the gayageum, the national instrument of her homeland.

JOE MORRIS
https://www.joe-morris.com/
Originally from New Haven, CT, Joe Morris, a leading figure in the improvisational music field on the east coast, began playing in 1969. He considers Cecil Taylor, Eric Dolphy, Leroy Jenkins, Thelonious Monk, Jimi Hendrix, and West African string music to be his major influences. Morris moved to Boston in 1975 where he further developed his unique approach to guitar playing, composition, and improvisation. His recordings are wildly eclectic, ranging from solo performances, traditional acoustical settings, to collaborative outings. The most recent of these is a recording that was just released with Do Yeon Kim called Macrocosm, where they perform improvisations using a diversity of approaches.

DO YEON KIM
https://www.facebook.com/doyeon.kim6237
Do Yeon Kim, a Seoul native, plays the gayageum, a Korean silk-stringed zither like instrument. Do Yeon has been making her own genre of music by incorporating traditional Korean music, world music, jazz, and improvisation. She has focused her career on broadly sharing and bringing new approaches to music and the development of unique techniques. Fully immersed in in traditional Korean music and Western modern works alike, Do Yeon has given several solo recitals and concerts in the US, Korea, and Europe. In 2017, Do Yeon released her first album, GaPi, with American pianist Chase Morrin and performed a sold-out release concert in Korea where the album was nominated last year for a Korean music award in the best music category. In addition to Joe Morris, she has also worked of late with Anthony Coleman. She has performed several times at John Zorn's The Stone in NYC. For a performance she gave with her group in Budapest, the press there described it as "everlasting, timeless, space-barred ...unforgettable, overwhelming."

On their recent release Macrocosm, Do Yeon Kim, on gayageum, collaborates with Joe Morris on guitar for five incredible string improvisations using a diversity of approaches from both players, including pointilistic improv, rich rivers of chords, languid moments of beauty, and moments where it is difficult to discern who is playing what.

Expect some of this magic to occur at the Boiler House Jazz event.

The performance begins at 8:00; doors open 30 minutes prior.

$15 in advance through Eventbrite
https://www.eventbrite.com/e/boiler-house-jazz-joe-morrisdo-yeon-kim-duo-tickets-55845554557

Online sales end at 6PM day of the show. Tickets available at the door at $20/each unless sold out.