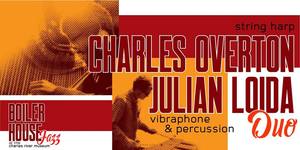 Where:
https://www.charlesrivermuseum.org/events-list/2019/2/3/boiler-house-jazz-charles-overton-julian-loida-duo Charles River Museum of Industry & Innovation
154 Moody St. (museum is set back from the street, follow the footpath along the Charles)
Waltham, MA 02453

The performance begins at 8:00; doors open 30 minutes prior.
Online sales end at 6PM day of the show. Tickets available at the door at $20/each unless sold out.

Boiler House Jazz presents two remarkable musicians, both of whom are well versed in the jazz world and the classical world, string harpist Charles Overton and vibraphonist Julian Loida. They will be performing as a duo for the first time.

Virginia native, Charles Overton, is a classically trained harpist who moved to Boston in 2012 to attend Berklee College of Music. While continuing to study classical music, Charles also began to explore the world of jazz and other improvised music. He became the first string harpist to be admitted to the Berklee Global Jazz Institute - a prestigious and highly specialized program at the school where students are able to learn from and work intimately with master jazz artists such as Danilo Perez, John Patitucci, Joe Lovano, and Terri-Lynn Carrington.

Currently Charles maintains an active performance schedule as a performer of classical, jazz, and contemporary music. He has performed all over the world participating in both ensemble and solo performances in London, Tokyo, Milan, and Rome as well as America's finest concert halls including Carnegie Hall. Recent performances include shows at Isabella Stewart Gardner Museum, the LIlypad, and at Symphony Hall with the Boston Symphony Orchestra. His latest jazz album, Convergence, was released in 2017 and debuted the Charles Overton Group.

JULIAN LOIDA
http://www.julianloida.com/about/
Julian Loida is a percussionist, multimedia artist, and curator exploring repertoire spanning Western Classical Music, to Cuba Bata drumming, to Jazz and R&B. Julian grew up in St. Louis performing both in a rock back and also as a member of the St. Louis Youth Orchestra. Since then he has gone on to perform with Alarm Will Sound, Callithumpian Consort, and the Chautauqua Symphony Orchestra. He was also a percussionist and contributed as a composer and arranger with the critically praised folk-world band Night Tree who have recently decided to disband.

Beside being a proficient sideman, Julian is a passionate entrepreneur, curator, and producer having directed a number of interdisciplinary projects. He leads a folkloric Cuban & Brazilian band called INA and a modern world-jazz quartet called Mojubá, and more recently is half of a synthesizer and vibraphone duo called Loida & Lenahan.

This meeting of these two musicians with some shared background in multi genre interests and projects, should make for an electrifying evening.

Tickets in $15 in advance at the link below
https://www.eventbrite.com/e/boiler-house-jazz-charles-overton-julian-loida-duo-tickets-55847153339

Performance begins at 8:00PM, doors open 30 minutes prior.
A beer, wine, and non- alcoholic beverage cash bar will be available