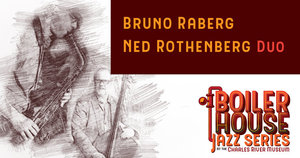 Where:
Charles River Museum of Industry & Innovation
154 Moody St. (museum is set back from the street, follow the footpath along the Charles)
Waltham, MA 02453

The performance begins at 7:30; doors open 30 minutes prior.
Tickets are $15 and include one glass of wine or a beer. Online sales end at 6PM day of the show. Tickets available at the door unless sold out.

Bruno Raberg/Ned Rothenberg duo
These two seasoned and creative improvisors will respond to the moment, to each other, and to the wonderful sonic environment of the CRMII boiler room in an intimate dialog employing traditional and non-traditional sounds and colors.

Ned Rothenberg
http://www.nedrothenberg.com/
Composer/Performer Ned Rothenberg has received international acclaim for both his solo and ensemble music, presented for the past 33 years on 5 continents. He performs primarily on alto saxophone, clarinet, bass clarinet, and the shakuhachi - an endblown Japanese bamboo flute. His solo work utilizes an expanded palette of sonic language, creating a kind of personal idiom all its own. In an ensemble setting, he leads the trio Sync, with Jerome Harris, guitars and Samir Chatterjee, tabla, works with the Mivos string quartet playing his Quintet for Clarinet and Strings and collaborates around the world with fellow improvisors. Recent recordings include this Quintet, The World of Odd Harmonics, Ryu Nashi (new music for shakuhachi), and Inner Diaspora, all on John Zorn's Tzadik label, as well as Live at Roulette with Evan Parker, and The Fell Clutch, on Rothenberg’s Animul label.