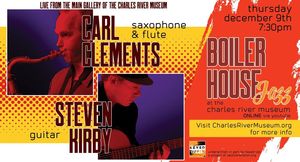 Admission:
$!5 suggested donation or give what you can

Donate with PayPal bit.ly/palCCSK
SUGGESTED DONATION: $15
All donations are shared equally by the ARTISTS and the MUSEUM
The Boiler House Jazz Series is made possible by your voluntary financial support. Please give what you can. Any amount will be appreciated.


Saxophonist/flutist/composer Carl Clements performs internationally in a variety of styles, with a particular focus on jazz, Hindustani classical music, and various forms of improvised and pre-composed music. He is featured on numerous recordings, and has performed at jazz festivals and concerts in the US, Europe, Asia, South Asia, and Southeast Asia. He received a Ph.D.in ethnomusicology at the CUNY Graduate Center, an MFA in Jazz Performance from CalArts, a BM in Jazz Composition and Arranging from Berklee College of Music, and has studied North Indian classical music on the bansuri since 1989.
As an educator, Clements’ primary areas are jazz performance, theory, and ethnomusicology, and he is currently Saxophone/Improvisation Instructor and Jazz Combo Coach at Amherst College, where he has also served as Visiting Director of Jazz Performance.


Guitarist, composer, educator Steven Kirby (“a guitarist of rippling technique and a poetic mind”- Downbeat) is known for performing exciting, melodic, lyrical, and expressive jazz as well as other contemporary styles. He has appeared on multiple recordings including three as a leader “Point Of Balance” and “North Light” (Challenge Records)—and “Illuminations” (WCS records). “Illuminations” was Downbeat Magazine’s “Editors Pick” and was included on the Grammy Nominations long list in 4 categories. He has performed and/or recorded with many of today’s most respected contemporary musicians including Chris Potter, Mike Manieri (Steps Ahead), Joe Lovano, Harvie S, George Garzone, Allan Holdsworth, and others. He has toured in the U.S., Canada, Caribbean, Europe, China, and Africa. Kirby’s music has been played on over 100 radio stations in the US and internationally, including features on NPR’s “Here and Now”, “Jazz with Bob Parlocha”, and “Eric in the Evening."
His jazz compositions have won awards in the International Songwriting Competition, the Billboard Song Contest, and Downbeat. He is a graduate of Berklee College of Music and has a Masters degree in Jazz Composition and Arranging from University of Massachusetts (Amherst). Kirby has published articles in Guitar Player Magazine, Jazz Improv Magazine, and others. He is currently an Associate Professor (Harmony & Jazz Composition Dept.) at Berklee College of Music and also teaches as Visiting Professor at Wellesley College. He has just completed an instructional book for Berklee Press entitled Jazz Guitar Improvisation Strategies published in January 2021 by Berklee Press/Hal Leonard Publishing.
Clements & Kirby have performed together in various contexts since the 1990s. They will present a concert of mostly original music that is rooted in jazz, and incorporates an eclectic variety of musical genres and styles, including the music of India and Brazil.


This concert will feature an artist interview conducted by Gerry Beaudoin
Gerry Beaudoin is an American jazz guitarist who was a member of the New Guitar Summit with Jay Geils and Duke Robillard. His family has lived and worked in Waltham (including at the Waltham Watch Company) for several generations. He has appeared on over fifty recordings.
For more on Gerry, visit: https://www.allaboutjazz.com/musicians/gerry-beaudoin

The Boiler House Jazz Series is underwritten in part by
KeyedUp.org, a project of JazzGeneration