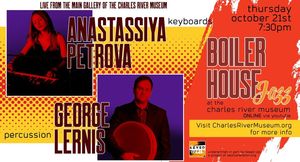 Anastassiya Petrova is a jazz pianist/organist from Kazakhstan and a participant in many international festivals (Italy, Bulgaria, Russia, and United States). Her influences include contemporary jazz pianists Chick Corea, Herbie Hancock, and Brad Mehldau, and jazz organists such as Larry Goldings, Jack McDuff, and Joey DeFrancesco. Since graduating from Berklee School of Music, Anastassiya is now working as a graduate assistant with the Berklee Global Jazz Institute.
Anastassiya has had the opportunity to perform with Dee Dee Bridgewater, Luciana Souza, George Garzone, Terri Lyne Carrington, Danilo Pérez, and Dave Liebman, to name just a few. In addition to fronting her own trio, Anastassiya has also fronted her own organ quartet. More recently, she has performed in ensembles with Allan Chase and Noah Preminger. She also performed two very moving tributes on-line early this year to Chick Corea, someone who greatly influenced her decision to study and become a jazz musician.
https://www.facebook.com/AnastassiyaPetrovaMusic/

George Lernis is a world class percussionist, drummer, and educator based in the Boston area who has played with countess musicians in the global music realm as well as in jazz circes. Born and raised in Nicosia, Cyprus, George has performed and collaborated with prominent figures such as Antonio Sanchez, Dave Liebman, Anat Cohen, Tiger Okoshi, A Far Cry, Mehmet Sanikol's Whatsnext?, and the Pharos Ensemble to name a few. He just returned from Athens, Greece where he recorded with an exciting new project called the Anatoliama Ensemble. George is considered to be bi-musical, having studied equally the traditions of the Middle East and Jazz music. In addition to the drum set, he specializes in a number of percussion instruments such as the darbuka, bendir, and riq.
https://georgelernismusic.com/home

Anastassiya and George will engage in a mid-set conversation with the veteran music journalist Kevin Lowenthal. As a Boston Globe correspondent for 17 years, he has written about jazz, world, and classical music. He has also written about music, film, and comics for other publications

All donations are shared equally by the ARTISTS and the MUSEUM

The Boiler House Jazz Series is made possible by your voluntary financial support. Please give what you can. Any amount will be appreciated.

The Boiler House Jazz Series is underwritten in part by KeyedUp.org, a project of JazzGeneration