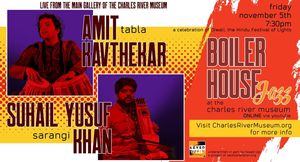 SUGGESTED DONATION: $15
All donations are shared equally by the ARTISTS and the MUSEUM
The Boiler House Jazz Series is made possible by your voluntary financial support. Please give what you can. Any amount will be appreciated.

Amit Kavthekar was groomed in the art of tabla at the age of six by the legendary Ustad Allarakha. He has subsequently studied with Indian classical music maestro and internationally known percussionist Ustad Zakir Hussain. In addition to Zakir Hussain, Kavthekar has performed worldwide with with eminent Indian musicians such as Sivamani, Ustad Amjad Ali Khan, Ustad Shahid Parvez Khan, Ustad Ashish Khan, Pandit Buddhadev Dasgupta, Pandit Kushal Das, Pandit Shivkumar Sharma, Pandit Jasraj, and many others. He performed at the 2018 United Nations Day Concert with Ustad Amjad Ali Khan, Ayaan Ali Bangash, and Amaan Ali Bangash, as well as with the Refugee Orchestra project.
Kavthekar has collaborated frequently with western classical, jazz, and fusion musicians. He is a member of the Purnalokha quartet along with David Balakrishnan of the Grammy winning Turtle Island Quartet. He has played with the Massachusetts Symphony Orchestra, and is a founding member of the band Sawaari, which explores diverse world music.
Kavthekar currently teaches tabla at the New England School of Music, and leads university-level master classes and workshops.

Suhail Yusuf Khan is a devoted sarangi player who was hailed as a child prodigy in the world of Indian classical music. Continuing in the family tradition, he draws from a rich musical heritage and is an eighth generation sarangi player. He is the grandson of renowned sarangi legend Padmabhushan and the Padma Shri award recipient Ustad Sabri Khan, and is nephew of the sarangi genius, Ustad Kamal Sabri.
Kahn started learning to play the Sarangi at the age of seven under the tutelage of his uncle and grandfather. He gave his first live performance at the age of 11, and has performed extensively in India & internationally since then. A multifaceted artist who is also a music composer; singer, & songwriter, his versatility extends to varied genres of music from Indian classical music to contemporary rock, jazz, world, and folk musics. The British Council in New Delhi named him a Cultural Ambassador from India to the UK.
Kahn is currently studying ethnomusicology at Wesleyan University. His projects include "Yorkston Thorne Khan" (with James Yorkston & John Thorne) and the "Hauz Khas Connection" (with Hyunpill Shin from South Korea & Vishal Nagar from the USA).

This concert will feature an artist interview conducted by Phil Scarff. Phil Scarff has pioneered in the performance of North Indian classical music on soprano saxophone. He is also a master jazz saxophonist, and leads the acclaimed world jazz ensemble Natraj as well as his duo with Lewis Porter.
For more info on Phil, visit: http://www.philscarff.com/

The Boiler House Jazz Series is underwritten in part by
KeyedUp.org, a project of JazzGeneration

Reddit
05/11/2021 19:30:00 05/11/2021 21:00:00 America/New_York Boiler House Jazz Concert ONLINE: Amit Kavthekar (tabla) & Suhail Yusuf Khan (sarangi) —A Jazz Celebration of Diwali! SUGGESTED DONATION: $15 All donations are shared equally by the ARTISTS and the MUSEUM The Boiler House Jazz Series is made possible by your voluntary financial support. Please give what you can.... Charles River Museum of Industry & Innovation, Waltham, MA 02453 false DD/MM/YYYY