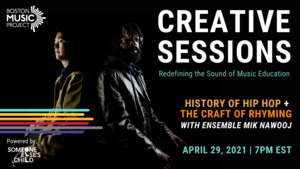 About this Event:
During the History of Hip-Hop + the Craft of Rhyming workshop, EMN’s resident MC Sandman and executive director, Christopher Nicholas will lead a lecture in two parts.

The history, taught by Christopher, will be navigated through notable hip-hop repertoires and their sociocultural implications/influences.

The craft of Rhyming, taught by Sandman will include a technical discussion of vowel sonority, rhythm/meter, refrain, common verse form, and more. Participants will then be asked to write a two-bar rhyme according to a strict structure, after which they will freely write their own rap.