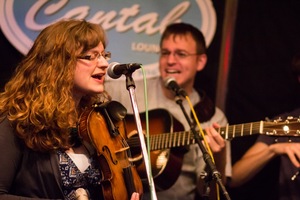 Our Tuesday Night Bluegrass Pickin' Party at the Cantab Lounge in Central Square, Cambridge, Massachusetts, gets started at 8:00 pm every Tuesday night. If you come to play bluegrass, you'll find an enthusiastic audience and a slew of great players here every Tuesday night. All players and audience are invited to attend.

ON ANY GIVEN TUESDAY NIGHT, we will have in attendance fifteen and more musicians representing all instruments in the bluegrass family. Open Pickin' before & after the Feature Band is a major part of every Tuesday night.

THE SCENE We are pleased to welcome pickers & singers from near & far. Most players who come to Bluegrass Tuesdays live in Greater Boston, but players from other states & countries sometimes stop by to pick and listen. The level of talent is high, the atmosphere is tolerant, and the music is hot.

ON OCCASION, we are also pleased to welcome touring bluegrass performers, Special Guests, other area & visiting presentors, area & visiting radio DJs, writers, reviewers, & photographers. PLAYERS The weekly roster is always in flux. Players come to hear and be heard by other players, so the music is almost invariably played at a high level. New bands and personnel line-ups form & reform rapidly in this creative atmosphere. Some higher-visibility entertainers who have played the feature set in years past include the James King Band, Jim & Jennie & the Pinetops, Jim Hurst & Missy Raines, and the Matt Glaser All Stars featuring Tony Trischka on banjo. Barry & Holly Tashian from Nashville with their tight Everly Brothers style harmonies did a great set for us awhile back, and Darol Anger, country singer-songwriter John Lincoln Wright, Peter Wolf of the J. Geils Band, Tom & Ray Magliozzi of National Public Radio's Car Talk fame, guitarists David Grier & Chris Jones, bluegrass/alt-country singer-songwriter Gail Davies, and Rounder Records execs have all dropped by to check out the scene.

NIGHTLY FORMAT Informal pickin' on stage or in front of the stage commences at 8:00 pm. At 10:00 pm, the Feature Band (different every week) plays one 50-minute set. Open pickin' then resumes until 12:45 am closing. I arrive at the Cantab at 4:30 pm to set up sound.

$7 VOLUNTARY DONATION REQUESTED There is no formal Cover Charge on Bluegrass Tuesdays. Instead, I go around with a hat and request a $7 Voluntary Donation from all audience members & players. All proceeds go to the Feature Band.