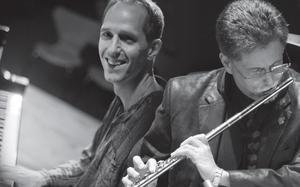 Flutist Peter H. Bloom and pianist John Funkhouser will celebrate the 120th birthday of the great Duke Ellington (born on April 29, 1899), with classics like Take the A Train, Don’t Get Around Much Anymore, Caravan, In a Sentimental Mood, and other Ellingtonia including Cottontail, I’m Beginning to See the Light, and the lush ballad Chelsea Bridge by Ellington’s longtime composing partner Billy Strayhorn.

The April 28 concert is the finale of the Amherst Library Winter Concert Series, made possible with the generous support of the Friends of the Amherst Town Library.

Peter and John have performed together for more than 20 years. Both are veterans of the legendary Aardvark Jazz Orchestra (46th season), and each has impressive credentials performing nationally and internationally. They play with style and verve.

Peter H. Bloom performs in the U.S., Canada, Europe, Asia, New Zealand and Australia, and appears on 45 CDs. He has shared the stage with Ricky Ford, Charles Neville, Geri Allen, Sheila Jordan, Jaki Byard and other jazz greats. Jazz Improv praised his “exquisite melody,” while ArtsFuse wrote, “Bloom’s solos on flute and amplified flute are always highlights of a performance.” In a career spanning almost 5 decades, Bloom concertizes widely with classical and jazz ensembles, including Ensemble Chaconne, Ensemble Aubade, mezzo-soprano D’Anna Fortunato, The Karl Henning Ensemble, The Makrokosmos Orchestra, The Modernistics, and the Aardvark Jazz Orchestra. Bloom has performed in London, Bangkok, Canberra, Wellington, Ottawa and other world capitals, and in hundreds of cities across 40 states and four continents. He is contributing editor for Noteworthy Sheet Music.