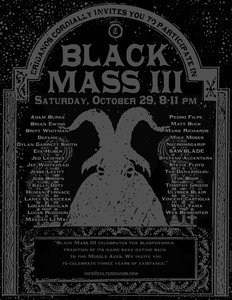 Eridanos Tattoo and Gallery will be hosting a Black Mass celebration for their three-year anniversary party Saturday, October 29th 8-11 PM.

"I was working in New York at Last Rites Gallery and realized that Boston, where I am from, has nothing relatable. All the tattoo studios are the same and I wanted to do something different, and it's safe to say we did" says owner and artist Markus Blanchard.

Since its inception, the space has been thriving with activity from monthly art shows and oddity markets to five internationally reknown tattoo artists and constant rotating guest artist roster.

The art shows and events have received national attention from local periodicals to musical publications like Decibel magazine.

"We just recently hosted an international artist's solo exhibit and received so much interest we had a line around the block, something that seems to be the regular since last year's Holiday Oddity Market with Bad Moon Consignment and Our Lady of Reclamation," said director Stephanie Crumley. "This upcoming event combines burlesque and so many prestiguous artists into an event we have never done before: I'm so excited to see what happens!"

Artists for the thirty-plus person exhibit come from a variety of metal music, illustration and tattooing background, all with the flare for the macabre.

Wes Benscoter is world reknown for his album artwork, DVD covers and magazine illustrations. He defines his work as “morbid art” and has worked with a dynamic client base including Cattle Deciptation, Autopsy, Warner Brothers, Harper Collins and many more.

Vincent Castiglia has turned plenty of heads with utilizing blood as his medium. Some contemporary highlights include custom-painting Slayer guitarist’s Gary Holt signature ESP electric guitar, a ten-page art feature in High Fructose Magazine, Volume 40, and being awarded the title of “Master Artist” at the Darkadya Black Star Awards.

Kelly Doty is a Salem-based tattoo artist and owner of Helheim Gallery. She has been tattooing since 2007. Doty describes her body of work as “spooky pop surrealism, big eyed girls and bobble-headed animals all with a dark side.” She has been recently featured on Inkmaster Season 8.

Additional artists include the following: