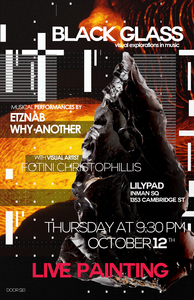 Black Glass is an interdisciplinary event featuring visual artist Fotini Christophillis and musical acts Etznab and Why Another. In Black Glass the goal is to explore the relationship between sound and movement and how this can be interpreted visually. This leads to a captivating performance in which the artist translates the soundscapes onto the canvas in turn influencing the musicians and the live performance. This generates a compelling and hypnotizing space for the audience since not only can they hear the music but can perceive it visually as well.

Fotini Christophillis is an interdisciplinary artist originally from Greenville, SC and currently based in Boston, MA. Her recent work lies at the intersection of painting, music, and dance, exploring traditional painting and drawing processes with the dynamics of live performance and the moving image. She has extensive experience producing multi-disciplinary projects and performances integrating music, video, and the visual arts. She also has a background in contemporary dance and studied at the Alvin Ailey American Dance Center in New York City before beginning her training as a visual artist.

Etznab is a duo guitar project co-led by Julian Picado from San Jose, Costa Rica and Iñigo Mantecón from Merida, Yucatán. Etznab stands for mirror in Mayan which the duo felt was an appropriate way to describe themselves since not only do they create a mirror image on stage but they are constantly mirroring each other in the music, not only in their sounds but constantly exchanging roles and ideas. The duo draws their influences from artists like Donny McCaslin, Radiohead and David Bowie.

Why Another is an internationally membered group currently based in Boston, Massachusetts. The group's wide-ranging influences create a palette from which its five members paint a unique soundscape over Adi Malka's compositions. The group is currently in the process of producing its first album.