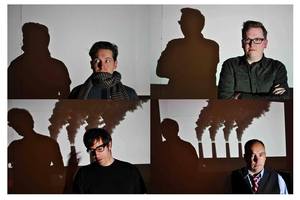 They’re back! For the first time since 2013, Dear Leader will perform live on March 31, 2017 at Black Box Sounds. What started out in 2002 as a moniker for The Sheila Divine’s Aaron Perrino to write and record music solo music eventually transformed into a full lineup long-running, critically acclaimed rock band. Over the course of their powerful five albums, Dear Leader grew into one of Boston’s finest anthemic-rock institutions. “Enough is enough,” Perrino stated on Facebook last week citing his old band’s penchant for political lyrics, “we’re coming back.”

The Furniture is a successful amateur rock n' roll organization dedicated to the creation and performance of rock n' roll songs that sound fun but are sad. They began in Massachusetts in 2014 and have been laughing at their own jokes ever since. Thankfully, they are still improving.

Based in Boston and San Francisco, The Douglas Fir have a flair for the cinematic. The band's moody-pop songs have garnered praise in Magnet Magazine, Village Voice, The Boston Globe, and The Big Takeover. Their new album “California Memory” was mixed by Brad Wood (Liz Phair, Sunny Day Real Estate, Pete Yorn) and the record is being distributed nationally via Revolver USA.