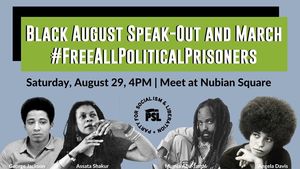 Black August is a sacred month for all revolutionaries. As the United States continues to cope with the utter ignorance of this administration in handling thee COVID19 pandemic, we are called upon by our revolutionary ancestors and elders of the Black Liberation Movement to recognize that the U.S. is a prison & police state, and does indeed have political prisoners.

Amidst a global pandemic, of which the U.S. is the epicenter of, prisons are still packed to the brim with people who are all at risk of death due to the virus. Prisons in the U.S. are generally overcapacity, unsanitary, and under the watch of die-hard racist prison guards who could not care less about the lives of inmates.

The PSL recognizes that the U.S. has political prisoners and we demand that they be set free, from Jalil Muntaqim, who is struggling with COVID19 to Jalil Al-Amin who is still being denied his constitutional rights in his trial and Leonard Peltier - one of the longest held political prisoners and the Vice Presidential candidate for the Party for Socialism & Liberation- is being allowed to languish in prison as his health deteriorates.

Any one of us could become a political prisoner. There are people, comrades in the struggle against racism and white supremacy, who are in prison for engaging in the same fight that we are in today. We walk in their footsteps and must uplift their names, stories, struggles, and plights.

Right here in Massachusetts prisoners are dying from COVID19 and related complications, while the state continues to refuse to grant them real relief, or simply free them and provide them so they can go home to their families and communities. Many prisoners lives hang by a thread due to the criminal neglect and maltreatment of prisoners. There have been 11 prisoner deaths related to COVID-19 reported in Massachusetts. Of those, eight were in state prisons, one was at the Essex County jail and two were inside the federal prison medical facility at Devens.

Join the PSL as we commemorate Black August and raise our voices against this barbarity and savage oppression of prisoners, honor political prisoners and call for their release, and pressure "our" politicians to not only commit to decarceration but providing the life saving relief that they and our communities need and deserve.

We invite all groups fighting against the racist prison/police state in Massachusetts and the entire country to join us for this day of action. If you would like to endorse this action and support please email bostonpsl@gmail.com or message this Facebook page.

All Power to the People!

Reddit
29/08/2020 16:00:00 29/08/2020 18:00:00 America/New_York Black August Speak Out & March: Free All Political Prisoners! Black August is a sacred month for all revolutionaries. As the United States continues to cope with the utter ignorance of this administration in handling thee COVID19 pandemic, we are called upon ... Nubian Square, Boston, MA false DD/MM/YYYY