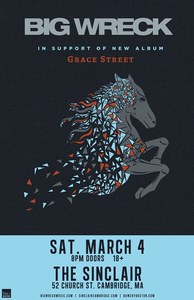 There’s a question posed by Big Wreck’s new album, Grace Street: What does it mean to be a rock and roll band in 2017? When you have a bunch of modern rock radio staples to your credit, earned platinum sales status, and shared stages with music icons, where do you go next? The answer is simple: To be an artist these days, one needs to embrace everything, and have the skill and savvy to put it all together with a clear vision of an end result.
Grace Street does this magnificently, confirming that Big Wreck is as vital and engaging today as they were when they first arrived on the scene in 1997. The new album follows the group’s 2014 JUNO-nominated effort Ghosts, but more significantly, front man Ian Thornley’s 2015 debut solo outing Secrets, on which he expanded his songwriting range while taking a more spontaneous approach in the studio. Those elements continued to be explored on Grace Street, Big Wreck’s first collaboration with co-producer Garth Richardson, whose extensive resume includes work with Rage Against The Machine and Red Hot Chili Peppers.

As mutual admirers for many years, it was a long-overdue pairing and both parties took full advantage of the opportunity. Thornley says, “There was a lot of growth from [2012 album] Albatross to Ghosts, and I think Grace Street is the next step in that process. What helped greatly was Garth’s attitude of let’s go further and deeper. We really left no stone unturned as we were making this record.”

The sonic diversity on Grace Street is indeed stunning, with heavy grooving tracks such as lead-off single “One Good Piece Of Me” and “Digging In” rubbing shoulders with the atmospheric “A Speedy Recovery” and the epic seven-minute instrumental “Skybunk Marché.” Other tracks feature added touches such as Miles Davis-style muted trumpet, wine glasses, a sample of Thornley’s daughter’s heartbeat, and a Leslie speaker guitar solo recorded on a mountainside adjacent to Richardson’s B.C. studio.