Between the Lines: FOUR HUNDRED SOULS 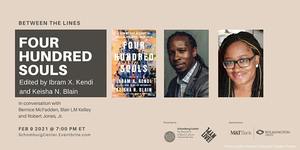 Four Hundred Souls is a unique one-volume “community” history of African Americans. Ibram X. Kendi along with co-editor, award-winning historian Keisha N. Blain, assembled 90 writers to consider the 400-year journey of African Americans from 1619 to the present. Each member of the “community choir,” as Kendi calls it—“women and men, cisgender and transgender, younger and older, straight and queer, dark-skinned and light-skinned"—takes on a five-year period, examining it from their unique point of view and set of experiences.

Join the editors Drs. Kendi and Blain alongside contributors Robert Jones, Jr. , Bernice L. McFadden, Dr. Blair L.M. Kelley for readings from the collection and a discussion on what it takes to develop a community history, by a community.

Produced in partnership with the LIVE from NYPL

GET THE BOOK | Readers everywhere who wish to pre-order the book can do so online at The Schomburg Shop. A limited number of signed copies will be available. All proceeds benefit The Schomburg Center for Research in Black Culture.

Keisha N. Blain, PhD is an award-winning historian, professor, and writer. is an award-winning historian, professor, and writer. She is currently an associate professor of history at the University of Pittsburgh, the president of the African American Intellectual History Society, and an editor for The Washington Post's "Made by History" section. Her writing has appeared in popular outlets such as The Atlantic, The Guardian, Politico, and Time. She is the author of 'Set the World on Fire: Black Nationalist Women and the Global Struggle for Freedom' (2018) and 'Until I Am Free: Fannie Lou Hamer's Vision of America (2021). (Read more at http://keishablain.com/)

Robert Jones, Jr., was born and raised in New York City. He received his BFA in creative writing with honors and MFA in fiction from Brooklyn College. He has written for numerous publications, including The New York Times, Essence, OkayAfrica, The Feminist Wire, and The Grio. He is the creator of the social justice social media community Son of Baldwin. Jones was recently featured in T Magazine‘s cover story, “Black Male Writers of Our Time.” The Prophets is his debut novel. (Read more at http://www.sonofbaldwin.com/)

Blair L.M. Kelley is Assistant Dean for Interdisciplinary Studies and International Programs in the College of Humanities and Social Sciences and Associate Professor of History at North Carolina State University. She is the author of the award-winning book, Right to Ride: Streetcar Boycotts and African American Citizenship in the Era of Plessy v. Ferguson. Right to Ride won the prestigious Letitia Woods Brown Best Book Award from the Association of Black Women Historians. Kelley is currently at work on a new book project called Black Folk: The Promise of the Black Working Class under contract at Liveright, an imprint of W.W. Norton and Company.

Ibram X Kendi is one of America’s foremost historians and leading antiracist scholars. He is a National Book Award-winning and #1 New York Times bestselling author. Kendi is the Andrew W. Mellon Professor in the Humanities and the Founding Director of the Boston University Center for Antiracist Research. Kendi is a contributor writer at The Atlantic and a CBS News Racial Justice Contributor. He is also the 2020-2021 Frances B. Cashin Fellow at the Radcliffe Institute for the Advanced Study at Harvard University. In 2020, Time magazine named him one of the 100 most influential people in the world. (Read more at https://www.ibramxkendi.com/about)

BerniceL. McFadden is the author of nine critically acclaimed novels including Sugar, Loving Donovan, Nowhere Is a Place, The Warmest December, Gathering of Waters (a New York Times Editors’ Choice and one of the 100 Notable Books of 2012), Glorious, and The Book of Harlan (winner of a 2017 American Book Award and the NAACP Image Award for Outstanding Literary Work, Fiction). She is a four-time Hurston/Wright Legacy Award finalist, as well as the recipient of four awards from the BCALA. Praise Song for the Butterflies is her latest novel.(Read more at http://www.bernicemcfadden.com)