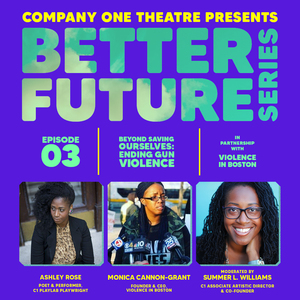 C1’s Better Future Series is a multi-part digital gathering bringing together Boston’s artists, community leaders, and policymakers to understand the needs of our neighborhoods and reimagine the future of our city, both in response to the current pandemic and our ongoing fight against the deep-rooted culture of white supremacy. Broadcast live on C1’s Facebook, Twitter, and YouTube, each monthly episode will focus on one of Boston’s neighborhoods, highlight the issues that matter most to its residents, and amplify opportunities for viewers to make a difference. Each episode will be anchored by an organization that is making an impact in that community, a policymaker with a focus on that community, and an artist whose work intersects with that community. In conjunction with this series, Company One Theatre will also be donating to social justice-driven organizations working toward the community concerns discussed in each episode.

Since May 2020, we have experienced a nationwide resurgence of action in support of Black Lives Matter following the murders of George Floyd, Breonna Taylor, and Rayshard Brooks by police officers. Just as in other major American cities, Boston is also experiencing an explosion of gun violence. Local activists, community leaders and artist-activists, many of whom are Black women, have been leading the conversation around ending gun violence and police brutality in our community.
On Friday, August 14 at 7pm join panelists Monica Cannon-Grant, Founder of Violence in Boston, Ashley Rose, C1 Playlab Playwright and Poet, and Summer L. Williams, C1 Co-Founder and Associate Artistic Director for a conversation highlighting the necessity of community organizing, racial healing and the role of art in moving forwards toward a Better Future in Boston.