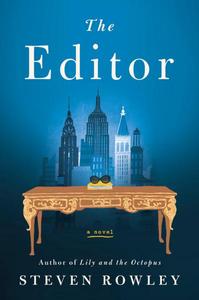 In 2016, Steven Rowley's smash debut, Lily and the Octopus, was a publishing phenomenon. The magical tale of grief and friendship sent shock waves through the literary world and was heralded on both sides of the Atlantic. Sold in translation in nineteen languages, Rowley's remarkable book made The Washington Post's list of Notable Fiction for 2016 and is currently in development as an Amazon Studios feature film.

Rowley now delivers on the soaring promise of that debut with The Editor, a stunning exploration of the complicated bond forged within families and a tribute to the serendipitous relationships that shape and define us—perfect for admirers of Less and The Nix.

The Editor opens in New York City circa 1992, when James Smale, a gifted but struggling young writer, learns a major publisher has expressed interest in his as-yet unpublished book. Finally, a real editor wants to discuss his work. Don't blow it, he thinks. Soon he's in a Doubleday conference room nervously awaiting the guy who holds James's future in his hands. Only it turns out, he's not a guy. And it's not just any editor but arguably the most famous editor in the world: the one and only Jacqueline Kennedy Onassis. And so begins the ride of a lifetime as this unlikely duo spar and bond over the mother-son dance writ large in James's candidly autobiographical manuscript.

By turns heartrending and hilarious, The Editor is a testament to Steven Rowley's utterly original storytelling. Subtly layered with affectionate detail about a beloved historical figure, it spotlights one of the least explored periods of the former First Lady's life as it weaves a beautiful, moving tale about the importance of reconciliation.

Steven Rowley is the bestselling author of Lily and the Octopus, which has been translated into nineteen languages. He has worked as a freelance writer, newspaper columnist, and screenwriter. Originally from Portland, Maine, Rowley is a graduate of Emerson College. He currently resides in Los Angeles.

Steven will be in conversation with William Kuhn, the author of Reading Jackie: Her Autobiography in Books.