Best of the Boston Comedy Festival 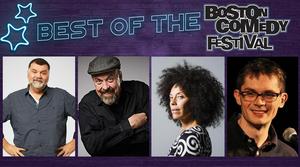 The Boston Comedy Festival is joining forces with Doubletree Guest Suites home of Scullers Jazz Club in Alston to bring the Best Comedians in Boston to the Allston.

MC - Arguably the Best of the best in the highly competitive Boston Comedy Scene Boston Comedian Tony V was named “Funniest Person in Massachusetts” by Showtime television. Tony has been featured on HBO, Comedy Central, MTV, Late Night with Conan O'Brien he was iconic umbrella salesman on Seinfeld.
Tony has also stared in too many films to be listed, that said here are a few, Worlds Greatest Dad with Robin Williams, The Town with Ben Affleck and most recently Sweeney Killing Sweeney which held it's premiere at the Boston Comedy Festival.

Bethany Van Delft - has appearances on Comedy Central, TV Guide Channel, NickMom, and 2 Dope Queen's podcast. She hosts MOTH Mainstages around the country, MOTH StorySlams & Grandslams, is thrilled to have a MOTH story re-posted by SULU!

Dan Boulger - who has been featured on The Late Late Show, BBC, HBO, and winner of the Boston Comedy Festival!

Jim McCue -2019 is shaping up to be a huge year for comedian Jim McCue. Jim's Internet comedy special "Nothing Personal" has gone viral with over 500,000 views in the first month! Jim has been featured on Comedy Central, Comcast Comedy Spotlight, NBC’s “Last Comic Standing,” RedEye on Fox News, Live at Gotham AXS TV and “Roughing It” on NESN in his native New England. Jim also founded and currently runs The Boston Comedy Festival.

Includes one Glass of House Wine or Beer

The venue is Wheel Chair Accessible