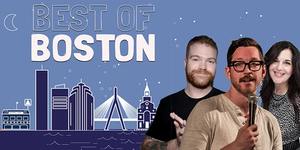 For over twenty one years the Boston Comedy Festival has been the “Comic’s Comedy Festival,” building a reputation for the best comedians anywhere in the world. Here are some of the very best in the business don't miss these truly funny folks.

Jim McCue went viral this year with his DryBar special “nothing personal” which has had 3 million views, Jim has been featured on Comedy Central, Comcast Comedy Spotlight, NBC’s “Last Comic Standing,” RedEye on Fox news, Live at Gotham AXS and Jim has made several appearances on Bob and Tom show. Jim also founded and currently runs The Boston Comedy Festival.

Pat Collins has appeared at The Comedy Studio, CBS Comedy Scene and The Comedy Connection RI. He recently starred in a series of very funny television commercials for NASCAR and New Hampshire Motor Speedway.

Comedian Rhonda Corey truly embodies the New England spirit. It’s no wonder that her authenticity with a twist of lovable sass has resonated with audiences from Rhode Island to California!

Will Smalley A purveyor of the silly-arts and dude-lover extraordinaire, Will is a former finalist in the Boston Comedy Festival.

Don't miss this show you never know who might drop by...