Bernie 2020 and Beyond: We Need A People's Party 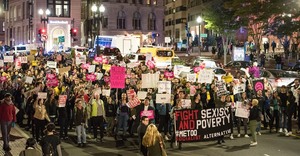 Boston Socialist Alternative and the Progressive Party Organizing Fund are co-hosting Bernie 2020 and Beyond: We Need a People’s Party event. Bernie Sanders’s presidential campaigns have taken the country by storm, popularizing bold ideas like Medicare for All, Rent Control, a Green New Deal, and taxing the rich. More and more candidates are taking up these calls, but the question remains: How can we actually win these important reforms and more?

The DNC and Democratic Party establishment showed in 2016 they will do everything in their power to prevent Sanders from winning the nomination, and 2020 will likely be the same. Meanwhile, the movement of progressive and socialist candidates running for office independent of the two major parties and talking about the need for a new people’s party is growing.

Join this important forum and discussion about how we can unite and spread independent people’s politics from coast to coast. The event will also be a fundraiser for Kshama Sawant’s re-election campaign this November in Seattle, a crucial election for the growth of our movement.

The event will be livestreamed. You can sign up to receive the latest live streaming information at: https://ppof.us/bernie-2020-and-beyond-we-need-a-peoples-party

Socialist Alternative spearheaded the campaign to elect Kshama Sawant to Seattle City Council in 2013, the first independent socialist elected in a major U.S. city in decades. They then led the successful campaign to raise Seattle’s minimum wage to the highest in the country, providing a massive boost to the $15 Now campaign that is spreading around the country. Find out more about Socialist Alternative at http://www.socialistalternative.org/

Progressive Party Organizing Fund (PPOF) is a political action committee that aims to build a winning new Progressive Party, specifically, one that will do the following:
-advance a comprehensive progressive agenda;
-only accept contributions from non-corporate interests;
-develop and work outside of the Democratic and Republican parties;
-organize itself democratically;
-pursue a bottom-up electoral strategy;
-appeal broadly with a unifying progressive populist message;
-establish municipal, county, and state party committees;
-run affiliated nonpartisan and Progressive candidates who have a reasonable chance of winning;
-support the party’s endorsed candidates and elected officials, and
-favor races that unify rather than divide the progressive vote.
For more information about the PPOF visit their website at http://www.ppof.us/

Jonathan Martin is a Professor of Sociology at Framingham State University. He is the editor of and a contributor to the book Empowering Progressive Third Parties in the United States (Routledge 2016); author of various articles on progressive politics; and a longtime progressive third party activist. He lives in Somerville, Massachusetts.

Margaret Whittier-Ferguson is a member of Socialist Alternative and the Somerville Teacher Association. She is a recent graduate of Boston University, a child care worker, a former teacher’s assistant, and an aspiring preschool teacher.