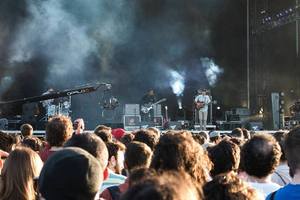 Benjamin Booker is an American musician, singer, songwriter and guitarist. He cites The Gun Club, Blind Willie Johnson and T. Rex as influences. His music was described by the Chicago Tribune as "a raw brand of blues/boogie/soul," by The Independent as "frenzied guitar-strumming and raw, soulful vocals that are hair-raising in intensity” and by SPIN as "bright, furious, explosive garage rock.”

Benjamin was born in Virginia Beach, Virginia. His family relocated to Tampa, Florida, where he attended all-ages DIY punk shows as a teenager. He attended Orange Grove Middle School, a magnet school for the performing arts, followed by Hillsborough High School, where he studied in the International Baccalaureate Program. He then attended the University of Florida in Gainesville, studying journalism with intentions of going into music journalism. After college, he moved to New Orleans to work for a non-profit organization and began playing shows.

Booker's self-titled debut album was recorded in December 2013 at The Bomb Shelter, an analog studio in Nashville. Produced by Andrija Tokic (Alabama Shakes, Hurray for the Riff Raff), the album was released on August 19, 2014 via ATO Records in the United States and Rough Trade Records in Europe. He went on to open shows for Jack White and Courtney Barnett.

Booker's second album Witness was written primarily in Mexico City and released on June 2, 2017. The album was produced by Sam Cohen (Kevin Morby) and announced with the premiere of its title track "Witness" (featuring Mavis Staples) alongside an essay written by Booker which detailed the experience that led him towards writing the album's title track. The album has garnered praise from Rolling Stone, the NY Times, and the Guardian.