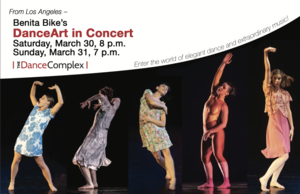 Benita Bike’s DanceArt returns to its roots with this Boston area performance, March 30, 8pm & March 31, 7pm, at The Dance Complex. The Company was founded in Boston in 1980, and relocated to Los Angeles in 1990. Founder Benita was Chair of the Boston Dance Alliance and taught for many years at her own studio downtown Boston and at Boston Center for Adult Education. Benita Bike’s DanceArt is known for its musicality, elegance, and expressivity. Employing expressive gesture, evocative contemporary movement, and an architectural use of space, Benita Bike makes sensitive observations on life. For 38 years this company has performed near and far – from the California coast to New England and abroad – bringing both concert dance and unique interactive outreach performances to audiences large and small.

“If Georgia O’Keeffe’s pastel landscapes were dances, they’d be the plains elegies of …choreographer Benita Bike and her company, DanceArt. Sweeping and full of muscular femininity, her works take charge of the space and evoke the metaphysical power of ritual…” – Los Angeles Times

This program will premiere Plugged, which explores our relationships to the machines occupying our world and how these machines affect our sensitivity to nature, quiet, and the earth. Other dances on the program are:
-Old Postcards from Europe, a quartet taking its inspiration from three late 19th & early 20th century postcards found in Munich, Vienna, and Budapest. “The tense undercurrent of Old Postcards from Europe was what gave this work its strength. The relationships between Bike’s characters, the forces from inside and outside their lives, coupled with the music and costumes, all crystalized into a united statement.” – LA Dance Chronicle
-Schoenfield Dances – featuring a rag, fughetta, shuffle, and boogie, melds early 20th century popular dance with a classical movement sensibility.
-For Rose – “In a passionate piece For Rose, dancers Rachele Donofrio and Liza Barskaya portray the complicated Mother-Daughter relationship.” – Malibu Times
-On Beat 3 – Short and snappy, On Beat 3 uses driving percussive rhythms and colorful off-balance movements to explore a world of ordered chaos.