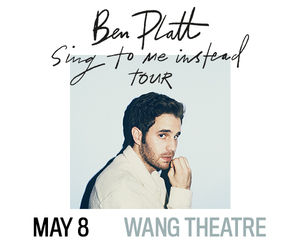 Grammy®, TONY®, and Emmy® Award-winning artist Ben Platt will take the Boch Center Wang Theatre stage as a part of his highly anticipated North American headline tour. The tour will come in support of Platt’s debut solo LP Sing to Me Instead, set to arrive everywhere Friday, March 29th. The show will feature support from Wrabel and Ben Abraham.

The winner of the 2017 Tony Award for Best Leading Actor in a Musical for his performance as Evan Hansen in the smash hit, Dear Evan Hansen, Platt is one of today’s most extraordinary talents – a truly multi-faceted actor, singer, and all-around performer. Sing to Me Instead sees him making a remarkable arrival as recording artist and songwriter, co-writing all of the album’s songs. Tracks like “Bad Habit” and “Ease My Mind” reveal a striking, deeply emotive amalgam of classic popcraft with sweeping vocals and Platt’s own undeniable charm and versatility.

Sing to Me Instead marks Platt’s first recorded output since his stunning duet with Lin-Manuel Miranda in March 2018 on “Found/Tonight.” The track – which debuted at No. 1 on Billboard's Digital Song Sales chart – was an installment in Miranda’s ‘Hamildrop’ series, and featured vocals from both men in an original medley of “The Story of Tonight” from Hamilton and “You Will Be Found” from Dear Evan Hansen.

Prior to “Found/Tonight,” Platt appeared as a lead vocalist on Dear Evan Hansen (Original Broadway Cast Recording), Atlantic Records’ Grammy® Award-winning companion to the Tony® Award-winning musical. One of only seven cast albums to reach the top 20 of the Billboard 200 in the last 50 years, the LP made a momentous chart debut upon its initial February 2017 release, entering the Billboard 200 at #8 – the highest debut position for an original cast album since 1961, and second highest digital sales debut ever for a cast album.

Platt received a Grammy® Award for his role on the Dear Evan Hansen (Original Broadway Cast Recording), as well as a 2018 Daytime Emmy Award for his part in the cast’s powerful performance of “You Will Be Found” on NBC’s TODAY. His rapidly growing body of work also includes memorable roles in the Tony® Award-winning original Broadway production of The Book of Mormon and the blockbuster films, Pitch Perfect and Pitch Perfect 2, amongst many others. Platt will next lead an all-star cast in the much-anticipated new series, The Politician, produced by Ryan Murphy, Brad Falchuk, and Ian Brennan (Glee) and co-starring Jessica Lange, Gwyneth Paltrow, and Zoey Deutch. Co-executive produced by Platt, The Politician will premiere later this year on Netflix. He will also star in the upcoming films “Run This Town” – premiering at this year’s SXSW Film Festival – and “Broken Diamonds.”