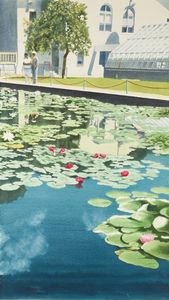 Ben Norris’ vibrant landscapes teem with creeping vines, tropical flowers, and encroaching vegetation. His large-scale watercolors of tranquil gardens and lush rainforests transport the viewer to a leafy, verdant paradise. Inspired by a lifelong interest in botany and a “fascination with the riot of greens and shapes of plants in forest scenes”, Ben Norris painted his natural surroundings throughout his life – from the Hawaiian Rainforest to the Brooklyn Botanic Gardens.

Born in Redlands, California in 1910, Norris attended Pomona College. After graduating he won a fellowship to Harvard University and later studied at the Sorbonne in Paris. By 1936, Norris moved to Hawaii where he spent the majority of his professional career. The works featured in Ben Norris: Botanical Oasis represent his time in Hawaii as well as his later move to New York where the Brooklyn Botanic Gardens were a much needed respite from the bustle of the city.