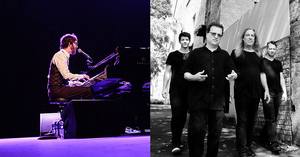 "I don't know how to brag about this record because I'm not really accustomed to that," says Ben Folds. "Maybe I should just say 'this is one of the best records I've made' and leave it at that." Quite the declaration considering Folds' wide-ranging, genre-defying canon, but the multi-platinum-selling singer/songwriter/producer is simply that enthused about SO THERE, his debut collaboration with celebrated New York City-based chamber ensemble, yMusic. Produced by Folds with yMusic's Rob Moose and CJ Camerieri, the album flourishes in the overlap between the pop and classical worlds, showcasing new pop songs written, arranged, and recorded by Folds & yMusic, alongside the debut recording of Folds' critically acclaimed "Concerto For Piano and Orchestra," which was produced and recorded by legendary rock engineer Elliot Scheiner. Songs like "Long Way To Go" and the ebullient title track are marked by forward-thinking studio craft and creative spontaneity, combining Folds' vaunted knack for hook and harmony with yMusic's talent for exciting interpretation.