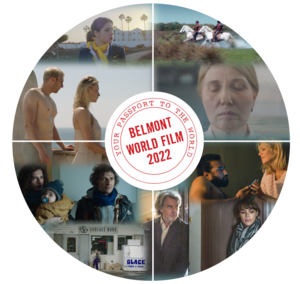 Admission:
$Individual in-person tickets are $12. Virtual individual tickets are $14 for a single viewer and $24 for multiple viewers. Several pass combinations are also available: in-person films only (4 films) are $40; online films only (7 films) are $85 for single viewers and $150 for multiple viewers; combo passes, which include 4 in-person films and 4 online films are $90.

Four of this year’s eight films will be shown in person at the beautiful new Majestic 7 (81 Arsenal Yards Blvd. in Watertown) or the West Newton Cinema (1296 Washington Street). All but the closing night film on Monday, May 16 (which will only be shown in-person) will also be available for screening online. Q&As with filmmakers and discussions with expert speakers will take place on Mondays at 7 PM via Zoom, except for the closing night film, which takes place immediately following the screening.

Covid measures for in-person screenings include proof of vaccination or a negative Covid test within 72 hours of a screening, mask wearing, and social distancing (subject to change, depending on conditions).

Half the films are directed by women, with six directors making their feature film debuts alongside two veteran directors: two-time Cannes Film Festival winner Tony Gatlif (Latcho Drom, Exils) and Philippe Le Guay (Women on the Sixth Floor). Films feature such diverse languages as Albanian, Anishinaabemowin (Canadian First Nation language), Italian, Occitan (the language of the Oc people in the south of France), Polish, Romanian, and Spanish. Seven of the eight films are in French from France and Francophone countries, including Belgium, Canada, and Switzerland

This year’s films include:

A CHANGE OF HEART directed by Jérémie Elkaïm (France, North American premiere). Based on a true story and adapted from Calais mon amour by Béatrice Huret, a recent widow who finds herself volunteering at a shelter for refugees. After she befriends and falls in love with an Iranian teacher who fled illegally to Calais, she begins to question the prejudices she is accustomed to encountering, challenging the laws of her country. In-person: Sunday, March 27, 7 PM, Majestic 7 Cinema. Online: Friday, March 25, 7 PM through Sunday, March 27, 7 PM. Online discussion: Monday, March 28, 7 PM.

THE HEROICS directed by Maxime Roy (France, US premiere). An intimate sociological and family drama, exploring the themes of addiction, fatherhood, and marginality and based loosely on the life of the film’s star, François Creton. Online only: Tuesday, March 29, 7 PM through Monday, April 4, 7 PM. Online discussion: Monday, April 4, 7 PM on Zoom.

BOOTLEGGER directed by Caroline Monnet (Canada, New England premiere). A woman returns to her birthplace in a remote Native American community in northern Quebec and gets involved in debate about the referendum that would overturn the law banning the free sale of alcohol, pitting her and half the community against a bootlegger. In-person: Sunday, April 10, 7 PM, West Newton Cinema. Online: Friday, April 8, 7 PM through Sunday, April 10, 7 PM. Online discussion:Monday, April 11, 7 PM on Zoom.

THE MAN IN THE BASEMENT directed by Philippe Le Guay (France, US premiere). Bérénice Bejo (The Artist), Jérémie Renier (Potiche, BWF 2011), and François Cluzet (The Untouchables with Omar Sy) star in a domestic thriller about a manipulative man who moves into a couple’s unsanitary basement and starts spewing antisemitic rhetoric. Online only: Tuesday, April 26, 7 PM through Monday, May 2, 7 PM. Online film discussion: Monday, May 2, 7 PM on Zoom.

VERA DREAMS OF THE SEA directed by Kaltrina Krasniqi (Kosovo/Albania/Republic of Macedonia, New England premiere). When a renowned judge unexpectedly commits suicide, an unwelcome parade of relatives come calling to his wife, claiming to have ownership of the family’s village home, pressuring her to give it up in increasingly menacing ways. An intimate yet universal portrait of the power imbalances in a culture in which patrilineal inheritance is the norm. Online only: Tuesday, May 3, 7 PM through Monday, May 9, 7 PM, Online film discussion: Monday, May 9, 7 PM on Zoom.

SILENT LAND directed by Agnieszka Woszczynska (Poland/Czech Republic/Italy, East Coast premiere). A perfect bourgeois couple from Poland rent a holiday home on a sunny Italian island, but it quickly becomes anything but a stress-free vacation, when the two witness a terrible accident from their balcony. Expertly observed and carefully crafted with echoes of Ruben Ostlund’s Force Majeure. In-person only: Monday, May 16, 7 PM at the Majestic 7, followed by a live discussion.

The festival is funded in part by generous grants from Gravestar, the Mass Cultural Council and the Belmont Cultural Council. It is also supported by the Quebec Delegation of Boston and Villa Albertine.