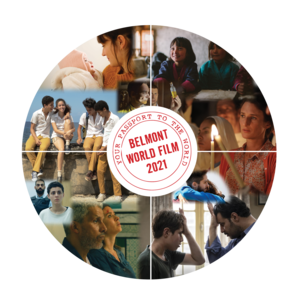 Belmont World Film's 19th International Film Series, "Family Ties," goes virtual, featuring 8 of the world's top films, most available for streaming for one week each, culminating in virtual discussions led by either the filmmaker or an expert on the film's subject on Mondays at 7:30 PM. Films are available to the entire state of Massachusetts.

Collectively the films in this year's series focus on the many definitions and configurations of families, while exploring the ties that bind or sometimes separate. Three of this year's films were their countries’ submissions for the Best International Feature Film Oscar, and one is currently shortlisted for a nomination! In keeping with previous years, nearly half the films are directed by women.

March 16-22: LUNANA directed by Pawo Choyning Dorji (Bhutan) New England premiere. An aspiring singer, living with his grandmother in the capital of Bhutan, dreams of getting a visa to relocate to Australia, but first must serve at the most remote school in the world, located in a glacial village in the Himalayas.

April 2-5: A SON directed by Mehdi Barsaoui (Tunisia, France, Lebanon, Qatar) New England premiere. In the summer of 2011, in the immediate aftermath of Tunisia's "Jasmine Revolution," an upper middle-class family spends a weekend in southern Tunisia. A surprising story unfolds, resulting in an examination of the family's liberal and modern lifestyle, as well as how religious traditions impact established medical practices.

April 13-19: THE DAZZLED directed by Sarah Suco (France) East Coast premiere. A 12-year-old girl’s parents join a controlling religious commune in southwestern France, making her on outcast at school and dashing her dreams of becoming a circus acrobat. Based largely on the director's experience growing up in a community that espoused sharing and solidarity, this feature debut portrays the damaging effects such cults can have on family members, effectively brainwashing them into giving up their true selves for what appears to be a greater spiritual calling.

April 20-26: SUN CHILDREN directed by Majid Majidi (Iran) New England premiere Previous Oscar nominee Majidi directs this story about a 12-year-old boy and three friends who work to support their families by committing petty crimes to make fast money. When they are given the job of finding an underground treasure by the local crime boss, they must enroll in a charitable school that will give them access to an underground tunnel.

April 27-May 3: GLORIA MUNDI directed by Robert Guédiguian (France, Italy) New England premiere. Guédiguian (Snows of Kilimanjaro, BWF 2012) reunites his regular cast of actors in this family drama about surviving in today's gig economy. Set in Marseille, the story centers around the birth of baby Gloria. Despite the family's joy, some family members have fallen on hard times, pinning their hopes on the baby's uncle when he opens a successful business.

May 3-10: AGOSTO directed by Armando Capó (Cuba, Costa Rica, France) New England premiere. A Cuban teenager, the primary caretaker for his beloved grandmother, develops his first crush during the summer of 1994, when the collapse of the Soviet Union and the ensuing shortage of food, supplies, and electricity compel people to make the perilous journey to the US by boat. Set in the director's rural hometown of Gibara and loosely based on his experiences.

The festival is funded in part by a generous grant from the Belmont Cultural Council and is sponsored by the Belmont Food Collaborative. Community partners include the Boston Latino International Film Festival, Café Czech, the Czech and Slovak Association in Boston, and Iranians in Boston.