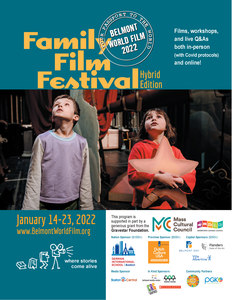 Admission:
$Online screenings: $10 for shorts, $14 for feature-length films. In-person screenings: $10/ticket and must be purchased online (although they are fully refundable). Workshops: $20 each (purchase in advance). Online Film Passes: $45; includes online film screenings only. Full Festival Passes: $65; includes all online films and all workshops. VIP Festival Passes: $100; includes all online films, all workshops, a t-shirt, and recognition in the program for a year. EBT Cardholder tickets are half price.

Belmont World Film’s Family Festival is a must-attend event for families with children ages 3-12, offering some of the world’s most significant films, as well as enriching filmmaking workshops. Films are from Brazil, Chile, the Czech Republic, France, Germany, Iceland, India, The Netherlands, Norway, Spain, the UK, and the US, and will be shown in their original languages with English subtitles (read aloud through headphones at in-person screenings). Filmmakers from around the world will also participate in virtual Q&As.

The majority of film programs will be available for online screening for all 10 days. There is also one in-person screening on Sunday, January 16, at 1 PM at the Majestic 7 in Watertown (81 Arsenal Yards Blvd.). Covid protocols, including proof of vaccination or a negative Covid test within 48 hours, masking, and social distancing will be required. The audience will be limited to 50 people.

This year’s festival features stories about such subjects as: a young girl defying female stereotypes; elementary school students learning how to grow food through a 100-year-old in-school gardening program in The Netherlands; magical characters inspired by legends and stories passed down by indigenous peoples, early African inhabitants, and Portuguese ancestors; and an Indian boy living in Germany who dreams of becoming a Bollywood star. Several films are based on children’s books, such as Julia Donaldson’s Superworm (with the voices of Olivia Colman and Matt Smith), the German films Jim Button and the Wild 13 and Laura’s Star, and a selection of short film programs from Scholastic/Weston Woods based on picture books, including their newest never-before seen films, films about Dr. Martin Luther King, Jr., and Mo Willems.

This year’s feature length films include:

Birta: When 11 year-old Birta overhears her mother talking about how worried she is about their finances, she raises money in all kinds of adventurous. (Age 9+)

Calamity, a Childhood of Martha Jane Cannary: An exquisite hand-drawn biopic about 12 year-old Calamity Jane’s empowering journey to the west in 1863. (Age 8+).

Dreams Are Like Wild Tigers: After his recent move from India to Berlin with his parents, a 12 year-old boy dreams of going back to India to audition for a part in a Bollywood film. (Age 9+)

Jim Button & the Wild 13: The story of Jim Button, now 12 years old, and his best friend, Luke the engine driver. In order to protect their island from the notorious “The Wild 13” pirate gang, the two set off with their steam engines on a perilous journey. (Age 6+)

Laura's Star: When a shooting star lands on 7 year-old Laura’s roof, equipped with the power to make people fly, Laura enjoys some spectacular entertainment and comfort. Based on the popular books of Klaus Baumgart. In Person Only: Jan. 16, 1 PM, Majestic 7, Watertown. (Age 5+)

Martin & the Magical Forest: When city boy Martin’s parents send him to a summer camp in the woods, he does everything to avoid enjoying it. He finds himself an unlikely hero, however, when the forest appears to come to life, in this magical adventure and upbeat tale with an environmental twist. (Age 7+)

Mission Ulja Funk: When 12 year-old Ulja’s astronomy equipment disappears, preventing her from pursuing her passion, she and a classmate race across Eastern Europe in a stolen hearse to watch the impact of an asteroid she’s discovered. (Age 8+)

My Dad Is a Sausage: When Zoe’s dad decides to give up his job as a banker to follow his dream of being an actor, it upsets the family dynamic. But the 12 year-old believes in her dad and vows to help him in every way she can. (Age 9+)

Nahuel & the Magic Book: Ever since his fisherman father was taken away by a wicked sorcerer Nahuel has had a deep fear of the sea. When he finds a mysterious book that grants its reader magical powers, he embarks on an adventure to rescue his father from the sorcerer who is after the book. An exciting fantasy/coming-of-age film. (Age 8+)

The Schoolgarden: For over 100 years, primary schools in The Netherlands have taken kids age 8-10 to the fields where they learn how to sow, grow and cook vegetables and other foods, as well as learn about the benefits of biodiversity. (Age 8+)

Tarsilinha: Eight year-old Tarsilinha journeys to a fantastic imaginary world, where she must get back the memories that were taken away from her mother, with the help of many magical Brazilian characters. (Age 8+)
Short film programs:

Someone to Watch Over Me: Family Bonds, about a little fox whose parents are geese; Mila, about a little girl whose life takes an unexpected turn during World War II; Umbrellas, about a 6-year-old who spends her days playing with her dog under her father’s protective "umbrella beard"; Ursa: The Song of the Northern Lights, about a little polar bear in search of his mother. (Age 4-8).

Superworm & The Snail & the Whale
Based on the picture books by Julia Donaldson and Axel Scheffler’s (The Gruffalo). Superworm features the voices of Olivia Colman and Matt Smith in a story about a super-long and super-strong worm. The Snail and the Whale about an unlikely friendship, a tour of the world, and a heroic rescue, with the voices of Dame Diana Rigg, Sally Hawkins, and Rob Brydon. (Age 3-8)

What’s New from Scholastic/Weston Woods Studios: Includes the studio’s newest films not yet available to the public: the witty Tomorrow Most Likely by Dave Eggers; Caldecott Medal winner We Are the Water Protectors by Carol Lindstrom; The Sun Is Kind of a Big Deal by Nick Seluk; Chicken Little: The Real & Totally True Story by Sam Wedelich; Tiny T Rex & the Impossible Hug by Jonathan Stutzman; Be You by Peter Reynolds; and Wishes by Mượn Thị Văn. (Age 3-8)