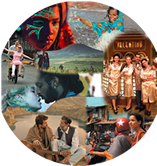 Belmont World Film's 18th Annual International Film Series features seven films, many of which premiered and won awards at the world’s major film festivals, followed by thought-provoking discussions led by expert speakers. Except for opening night on Sunday, March 17, screenings take place on Mondays at 7:30 PM. The opening and closing night films are preceded by optional dinner receptions at the theater from 6:00-7:00 PM.

3/17: THE HEART (Sweden). A contemporary story about love, relationships, and independence, set in Gothenberg and Stockholm and starring actress Fanni Metelius (Ruben Ostlund’s FORCE MAJEURE), who also wrote and directed the film. Preceded from 6:00-7:00 PM at the theater by an optional Swedish smorgasbord with Swedish pastries courtesy of the Scandinavian Cultural Center.

3/25: ASH IS PUREST WHITE (China). Director Jia Zhangke continues his body of work as a recorder of 21st-century China and its warp-speed transformations with this melodrama about a mobster and his girlfriend that unfolds over 15 years.

4/1: THE HEIRESSES (Paraguay). A once wealthy older woman, who resumes driving again after her girlfriend is imprisoned on fraud charges. She starts a local taxi service for a group of wealthy elderly ladies and meets an exciting younger woman who shakes up her life. Paraguay’s Oscar submission for Best Foreign Language Film.

4/8: JIRGA (Australia). A modern morality tale about a former Australian soldier who returns to Afghanistan to seek forgiveness from the family of a civilian man he accidentally killed during the war. Australia’s Oscar submission for Best Foreign Language Film.

4/15: ASAKO I AND II (Japan). A dramedy based on a 2010 novel about a woman who falls in love with two men who look the same but act completely differently.

4/22: HENDI & HORMOZ (Iran). According to local custom on the island of Hormuz in the Persian Gulf, thirteen-year-old Hendi is married off to sixteen-year-old Hormoz.

4/29: SIR (India). In order to escape the pitfalls of the old-fashioned village that condemned her as a young widow, a woman moves to Mumbai to become a servant for a privileged businessman, with dreams of becoming a fashion designer. Preceded from 6:00-7:00 PM at the theater by an optional dinner featuring Indian cuisine.

Tickets are $11 general admission and $9 for students and seniors in advance at www.belmontworldfilm.org, and $12 general admission and $10 students and seniors in person for cash on day of show beginning at 7:00 PM. EBT and WIC card holders can purchase half price tickets at the box office on day of show with cash. The Belmont World Film “Passport” includes eight admissions for $75 and can be shared with one other person (available online or in person). Tickets to the opening and closing night dinner receptions are $30 each and can be purchased online or by mailing a check to Belmont World Film, 19 Raynor Road, Sudbury, MA 01776.