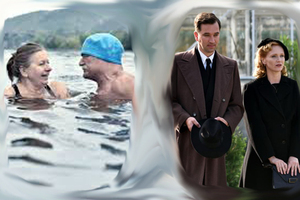 In conjunction with the Consulate General of the Czech Republic, Belmont World Film celebrates the 100th anniversary of Czech independence on October 28, with two recent Czech films on two Mondays, October 29 and November 5, at the Studio Cinema in Belmont (376 Trapelo Road). Both films begin at 7:30 PM and will be followed by discussions.

The series opens on Monday, October 29 with Bodhan Sláma’s ICE MOTHER, this year's Czech entry for the Academy Award's Best Foreign Language Film category. In the film a 67 year-old widow lives alone in a big villa with only traditional weekly visits from her two belligerent sons and their families to look forward to. Until one day when she rescues Brona, an affable ice swimmer with a depressed chicken, from drowning in the nearby river.

Set in the 1940‘s during the German occupation, FAMILY FRIEND on Monday, November 5, is a story about unrequired love and the first film in acclaimed Czech director Jan Hrebejk's (Divided We Fall, Beauty in Trouble, Kawasaki's Rose) Garden Store trilogy. Three young women (including Beauty in Trouble's Anna Geislerová) related by marriage and blood and two children await the return of their imprisoned husbands and fathers. During this difficult time, a family friend and doctor selflessly helps the family that is forced to live together due to the circumstances of the war.

Founded in the aftermath of World War I as one of the successor states of the Austro-Hungarian Empire, the Central European country of Czechoslovakia existed (with a brief interlude during World War II) from October 28, 1918, to December 31, 1992, before officially splitting on January 1, 1993 to form the independent Czech and Slovak Republics. On October 28, 2018, both countries will celebrate one-hundred years of existence, commemorating all that they have shared with the world together.