Behind the Scenes: The Weeping Camel 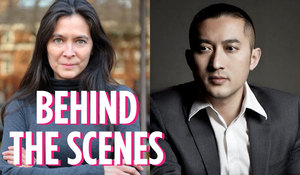 Get to know composer Huang Ruo, named one of the world’s leading young composers by The New Yorker, as he talks with Terrie and Bradley Bloom Artistic Director Diane Paulus about past projects and his A.R.T. commission, The Weeping Camel, a new production that will be co-directed by Paulus and Sidi Larbi Cherkaoui (Jagged Little Pill), adapted from the Academy Award-nominated documentary film.

Composer Huang Ruo has been lauded by The New York Times for having “a distinctive style.” His vibrant and inventive musical voice draws equal inspiration from Chinese ancient and folk music, Western avant-garde, experimental, noise, natural and processed sound, rock, and jazz to create a seamless, organic integration using a compositional technique he calls “Dimensionalism.”