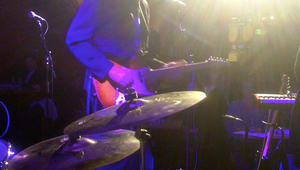 City Winery Boston presents Bees Deluxe live in concert on Friday May 6 at 8 PM. Bees Deluxe is an anything-but-basic blues band. Hell-bent on a mission to drag the electric-analog blues of 60’s Chicago, the Blue Note catalog and the funk of New Orleans into the 21st century, the band has created a genre-bending sound that they call “acid blues.”

Bees Deluxe is a British/American band who have played with Ronnie Earl, Joanne Shaw Taylor, Matt Schofield, Roomful of Blues, Walter Trout and David Maxwell. A modern four-piece blues band celebrating the music of Billie Holiday, Etta James, Albert Collins, Robert Cray, Tinsley Ellis, Freddie King & Roomful of Blues with respect and a dash of hot sauce. Receiving positive reviews wherever they play from Maine to Florida – and everywhere between. Showcasing a catalog of originals and classic covers, many on CD played by radio stations across the country and as far afield as Australia, Brazil and Japan. Bees Deluxe delivers the musical goods everywhere they can – in concert halls, theaters, bars and Festival stages.

For more information about the band: www.beesdeluxe.com