Bees Deluxe at the Bull Run 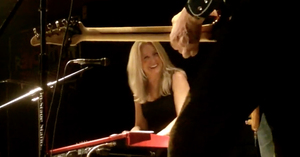 Bees Deluxe is an anything-but-basic blues band. They are hell-bent on a mission to drag the electric-analog blues of Chicago in the 60’s, the Blue Note catalog and the funk of New Orleans into the 21st century.

The band has won audiences from Maine to the Mississippi with their arresting and highly danceable originals and their innovative interpretation of less-travelled tunes by artists like Etta James, Joe Zawinul, J.B. Lenoir, Miles Davis, Billie Holiday, Albert Collins and the three Kings.

The band is excited to return to play live and in person at the Bull Run on Wednesday August the 5th - as the re-opening event of the 'Lose Your Blues" music series. They played a sold out show at the Bull Run on June 21st and are thrilled to be coming back again so soon.