Beer School: History And Culture: From Hunter-Gatherers To Whale Hunters 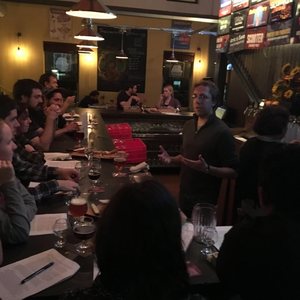 We're proud to announce the return of Beer School to our Brewery + Taproom. Running every Wednesday evening in October, this four-part course will introduce participants to the history, production, styles, and culture surrounding modern beer. Join our house beer geek, Brendan O'Toole, as he walks you through everything from alpha acids to zymurgy.

With the beer market diversifying as quickly as it has, it can be hard for customers to keep up, and the Boston market's heating up faster than most. A lot of beer drinkers out there want to know more, but may be somewhat intimidated by the aura of complexity surrounding modern beer. That's why we want to give people an opportunity to engage with beer informally, without pretension or intimidation. No prior knowledge required or expected, just curiosity.

In addition to educating our customers, one goal of our program is to give people a potential leg up if they're interested in joining the craft beer community. We've hired from our Beer School audience in the past, and we're always willing to help anyone looking to get into Boston's craft scene, whether with us or with any of the excellent breweries, beer bars, and bottle shops in and around town. The only way to keep the beer world fresh is by bringing new people and new perspectives into it.

Class 3: History And Culture: From Hunter-Gatherers To Whale Hunters
Beer's an ingrained part of our society, so much so that it's hard to imagine life without it. And indeed, the invention of beer predates, and perhaps even caused, modern civilization. How did modern beer come to be, and how has it affected the way societies grow and change? We'll cover the history of this humble but complex beverage, from the very first accidental brewing to the modern craft movement.