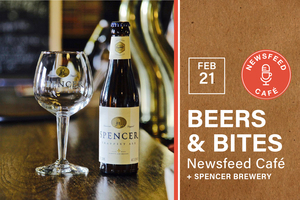 Have you ever had beer brewed by monks? Here's your chance!

Spencer Brewery is one of only 14 Trappist breweries in the world, and the only one in the United States. Trappist monks have been brewing beer for centuries and are still known as the master brewers of Europe. When the monks of St. Joseph's Abbey decided to take up brewing, they knew they would need the support of the International Trappist Association (ITA). Thus, they set out on journey across Europe to learn the ways of trappist brewing, and glean wisdom from those who have brewed for hundreds of years. Once they had this newfound knowledge, they started their quest toward certification. Three years later, they opened their brewery and began selling their Trappist Ale. Kevin Kervick, Co-Manager of Sales and Marketing, will present the great story of monks making beer in both Europe and America. He will also guide you through a tasting of their incredible beers, including their classic Trappist Ale.
Your ticket includes a flight of Spencer Trappist beer with delectable bar bites specially created and matched to the beer by our chef.

Must be 21 or older. IDs will be checked at the door