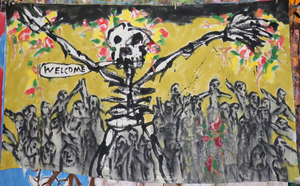 "Bedsheet Mitigations": exhibit of art painted on discarded bedsheets. By Peter Schumann, founder and artistic director of the Bread & Puppet Theater. Held this summer in the Fort Point area of Boston, MA.

During this covid-era "pause", the Vermont-based Bread & Puppet Theater (breadandpuppet.org) was gifted a large pile of king-sized bedsheets, discarded by a hotel. Renowned visual and performing artist Peter Schumann, the political puppet theater's founder and artistic director, immediately seized upon this as an opportunity. Not only to paint a scene per day, on a dumped clean slate canvas. But also to take this on as a daily exercise, of freely slapping paint around while grappling with all the issues that have made the world a sh*tty mess.

Like hanging out to dry in a mighty stiff wind, Schumann's "Bedsheet Mitigations" series, a portion of which will be on display in Fort Point's Midway Gallery, never really sits still for any viewer. His iconic visual approach, no matter if they are part of a performance or let to lay flat, are hardly ever created by Schumann for relaxed observation only.

The selections from Schumann's "Bedsheet Mitigations" series, specifically chosen for this exhibit at Midway, which is co-presented by the ARTSPEECH artists' collective, were first revealed at Bread & Puppet's "Insurrection – Lamentation -- Resurrection Service" performances, held up in VT during their socially distant contact-traced 2020-2021 season. Combined with these "mitigation" images will be several other bedsheet pieces on display at Midway, gleaned from Schumann's new "Crucifixion" series, which he started generating in earnest this past February-March.

Never one to mince words, Schumann's mission statement, found on the ARTSPEECH website and specifically addressing this exhibit in Fort Point, acknowledges the precarious position that the neighborhood's dwindling artists' community faces, in spite of the ironic fact that this particular Boston neighborhood, now dwarfed by pristine condition high-rise glass and steel, had once been declared "historic" in 2009 by the then mayor.