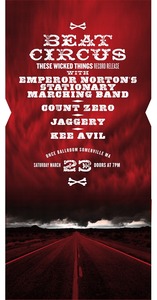 "Carpenter is equally drawn to the avant-garde as he is to the old, rural, and gothic. He has interests in free jazz, improvised music, film directing, and radio, and seeks ways to connect theses interests into a wide vision." -- Richard Elliot, PopMatters

"Boston musician Brian Carpenter has worked with so many big names that he seems bound to become a big name himself" -- Chris DeVille, Stereogum

These Wicked Things by Beat Circus

Never Be Yourself by Count Zero