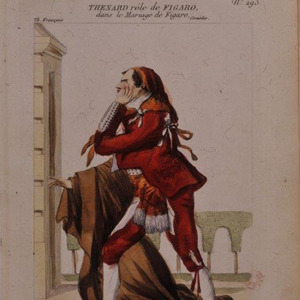 Available to members of Beacon Hill Seminars; to join or register, visit BeaconHillSeminars.org

Take a trip through the ages with Figaro, the clever, resourceful servant who outwits his master and helped launch a revolution. Inspired by Boston Lyric Opera’s upcoming production of The Marriage of Figaro, lecturer and operatic coach/pianist James Myers traces the archetypal character of Figaro from the Beaumarchais trilogy of plays, which challenged the class hierarchy in French society and captured the angry, restless zeitgeist of a society on the brink of revolution, to his many operatic incarnations.

The course begins with an in-depth discussion of the Beaumarchais trilogy, then moves to Mozart’s masterpiece The Marriage of Figaro, which interweaves social commentary with a rich, complex treatment of human relationships and emotions. Next, study several comedic adaptations and thoughtful reimaginings by leading contemporary composers, as well as consider the lasting impact of Figaro – from Beaumarchais to Mozart and beyond – in today’s world.

With opportunities for musical listening and discussion of recorded greats as well as a special guest singer live, James Myers weaves together threads of historical analysis, musicology, and opera repertoire in this in-depth, 4-week course.

About the Presenter:
A native of Portland, Oregon, keyboardist James J. Myers is in demand as vocal coach, recitalist, lecturer, chamber musician, and composer. He has shared the stage with leading artists of our age, including Christine Brewer, Judith Christin, Thomas Hampson , Jennifer Koh, Robert McDuffie, Chris Thile, and Renée Fleming, and conductors David Angus, Matthew Halls, Peter Oundjian, and the late Marvin Hamlisch. He currently serves on the collaborative team at The Boston Conservatory and is lecturer with Boston Lyric Opera, where he has served as coach/pianist for The Merry Widow, In the Penal Colony, La Traviata, and Kátya Kabanová, among others. Mr. Myers has excelled in operatic and faculty positions at major houses, conservatories, and universities throughout the U.S., and holds degrees with distinction from the Eastman School of Music, the University of Colorado at Boulder, and the Hochschule für Musik und Theater Hannover, Germany, where he was awarded a Rotary Graduate Fellowship.