Battle Green Vietnam : The 1971 March on Concord, Lexington, and Boston 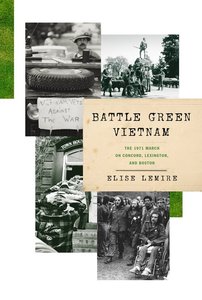 Join us to commemorate the 50th anniversary of the historic antiwar march and protest on Memorial Day Weekend 1971 and learn more about this key event in Massachusetts history at MassMoments: https://www.massmoments.org/moment-details/vietnam-veterans-arrested-on-lexington-green.html

In the spring of 1971, the largest mass arrest in Massachusetts history unfolded at a site nationally celebrated as the birthplace of freedom and democracy. With peace efforts at a standstill, the New England chapter of Vietnam Veterans Against the War had organized an event to rouse public support for their cause. Over the course of the long Memorial Day weekend, a band of more than two hundred young, fatigue-clad veterans sounded the alarm for peace and patriotism by marching—in reverse—the path Paul Revere had taken two centuries earlier when he called on the American colonists to rise against their British oppressors.

Enacting the parts of colonial militiamen, the veterans set off in patrol formation along the famed Battle Road, a route calculated to take them past Concord's Old North Bridge, onto Lexington's Battle Green, and up to Bunker Hill. Determined to reanimate the patriotic sentiments expressed by the area's many Revolutionary War memorials, they revealed how far the nation had veered from its ideals by staging reenactments of the brutal atrocities they had witnessed and perpetrated in the name of freedom on the other side of the world. "With an ironic twist," the fliers they distributed explained, "our presence in Indochina as viewed by a native of an occupied village easily coincides with the British army in America." To the selectmen of the town of Lexington who ordered their mass arrest, the veterans were defiling spaces sacred to the nation's Revolutionary past; to the hundreds of bystanders who fed, sheltered, and committed civil disobedience with them, they were an inspiration. Battle Green Vietnam demonstrates the power of mobilizing history, myth, and memorials to effect revolutionary change.

Elise Lemire is the author of Black Walden: Slavery and Its Aftermath in Concord, Massachusetts and "Miscegenation": Making Race in America, both published by the University of Pennsylvania Press. A two-time fellowship recipient from the National Endowment for the Humanities, she is Professor of Literature at Purchase College, SUNY and a native of Lincoln, MA.

Note: This event will be held on Zoom, and people must pre-register by noon of the day of the event to receive the link to attend. If you have not received the link by 3pm on that day, please let us know by 5pm, if possible, so that we can resend it.