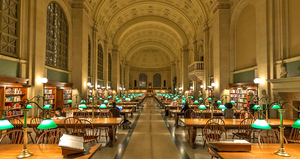 The Ultimate FREE event! 'Free to All' is carved into the façade of the Central Library in Copley Square...

Bates Hall, named in honor of donor Joshua Bates and designed by Charles Follen McKim. The barrel vault ceiling runs the length of the room, overlooking researchers at their tables. The Copley Square building opened to the public in 1895.

The Boston Public Library McKim Building (built 1895) in Copley Square contains the BPL's research collection, exhibition rooms and administrative offices. When it opened in 1895, the new Boston Public Library was proclaimed a "palace for the people." The building includes lavish decorations, a children's room (the first in the nation), and a central courtyard surrounded by an arcaded gallery in the manner of a Renaissance cloister. The library regularly displays its rare works, often in exhibits that will combine works on paper, rare books, and works of art. Several galleries in the third floor of the McKim building are maintained for exhibits.

Boston Public Library was founded in 1852. The first Boston Public Library location opened in 1854 in two rooms in the Adams School on Mason Street. Because the Mason Street space was small and poorly lit, a new building opened at 55 Boylston Street in 1858. It cost $365,000 to build and held 70,000 volumes. By 1880, the Boston Public Library again needed a larger building to accommodate its holdings, and architect Charles Follen McKim of McKim, Mead, and White was chosen to design a new building at the corner of Dartmouth Street and Boylston Street. It opened in 1895 and cost $2.268 million, with a capacity of 2 million books.