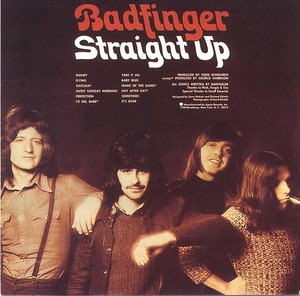 It’s the 45th Anniversary of the Greatest Album by Badfinger, 1972’s Straight Up, and the band’s legendary guitarist, songwriter, and vocalist Joey Molland—along with his dynamic band—brings the album to the stage in a bracing live show.
Featuring 5 tracks written by Joey, Q Magazine described Straight Up as ”...brimming with mature melodies and bracing verse/chorus interplay…”, while NME deemed it ”...a stone cold beauty of an album…” and advised, “Love it like your mother …”
From their legendary lineup, Joey Molland continues the unforgettable legacy of BADFINGER.  One of the original signings to the Beatles’ Apple Records label, they had their first hit single with a Paul McCartney penned song, Come and Get It, which went to #7 in the U.S. charts.  Badfinger followed this with their own compositions No Matter What, Day After Day (produced by George Harrison), and Baby Blue, which went to #8, #4 and #14 respectively.