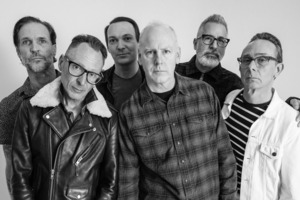 When they formed the band in 1980, quintessential punk pioneers Bad Religion were four teenage friends living in the suburbs of Los Angeles. Fast forward to today, Bad Religion has become synonymous with intelligent and provocative West Coast punk rock and are considered one of the most influential and important bands in the genre. Over the past three decades the band has continually pushed social boundaries and questioned authority and beliefs armed only with propulsive guitars, charging drumbeats, thoughtful lyrics and an undying will to inspire and provoke anyone who will listen.

Bad Religion was a major force in reinvigorating the modern punk movement, produced beloved international hits such as “Infected,” "21st Century (Digital Boy)" and “Sorrow” and has maintained an impassioned worldwide following of young and old who continue embrace a music that gives voice to, and celebrates, their dissent. Cementing their place in history as a groundbreaking band who helped create a movement in Los Angeles with classic releases like How Could Hell Be Any Worse?, Suffer, Recipe for Hate, Stranger Than Fiction, Process of Belief, The Dissent of Man, and True North. Bad Religion continue to inspire and create with a unique style that continues to cross boundaries and transcends genres.

Bad Religion have released a new album entitled Age of Unreason. Since the group’s formative years innovating their iconic fast and melodic sound, the band has steadfastly advocated for humanism, reason, and individualism. Today, as these values are in decline, and nationalism and bigotry are on the rise, Bad Religion’s message has never been more essential. Age of Unreason delivers a powerful and inspired rejoinder - a political and deeply personal treatise on all they believe in.