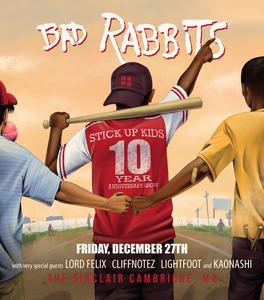 A magical short-haired dark-skinned voluptuous vixen who sends smartphones from functional to fried, a steamy workplace confession that takes a turn for the worse, and sexy daydream fantasies that manifest into reality are just some of the subjects Bad Rabbits flirt with on their 2018 EP, Mimi.

Accompanied by animated and eye-popping art, the seven-song set flips like a funky photo album sound tracked by shimmering synths, heavenly falsetto, ratchet horns, and swaggering bass lines. You wouldn’t be surprised if Pam Grier and Richard Roundtree or Crockett and Tubbs walked into the frame at any second, but it suits the Boston trio—Fredua Boakye [vocals], Sheel Davé [drums] and Salim Akram [guitar]-- just as well. The title character stands at the center of every track as either its subject or a bystander, loosely binding these scenes together.

“We wanted to base the themes around this fictional character,” explains Sheel. “She’s the through-line. All of the illustrations and songs feature Mimi in some way. Musically, the EP represents what we’ve always done, but it’s a little more adventurous.”

“In a sense, the character represents our infatuation with phones and social media,” says Fredua. “She’s all about Starbucks lattes and taking selfies in random places. Mimi is spontaneous and crazy, but fun to be around. When I think of her, I think of my quintessential dream girl. It’s instant attraction.”

“We’re countering the stereotypes and telling a crazy, over sexualized story from a female point-of-view,” adds Salim. “We’re not trying to give you the perspectives of a bunch of 35-year-old guys. It’s not about us – it’s all about Mimi. You don’t even know if Mimi is talking about a girl or a guy. It’s more relatable that way—and mysterious. We’re celebrating women of all shapes, colors, sizes and walks of life in these songs. Some are meant to be lighthearted but then we have a song called ‘F on the J.O.B.’ that deals with the serious topic of sexual harassment in the workplace. Women need to be respected, period, and we’re telling that viewpoint through the story of Mimi.”

“F on the J.O.B.”—co-written with Gavin Castleton—shuffles from a wall of synths and slick guitars into a raunchy refrain as the situation begins to go way too far, “If you don’t want to ‘f-u-c,’ then don’t say ‘s’ to me!”

Despite the danceable, upbeat track, the message is quite clear:

“We actually wrote this song well before the #MeToo movement, and it was inspired by women’s experiences in the workplace,” explains Fredua. “Now, with everything that has happened in the past year, the song is even more important to us. The song and the video shame and mock the men who feel entitled to sex just because they are attracted to a woman. The narrator in this song is the guy that Mimi deals with every day at work. To the douchebags that sexually harass women, your time’s up. To women, we just want you to know that we support you.”

“Chances are, you’ve been attracted to someone you work with at some point in your life,” Sheel remarks. “But sexual misconduct in and out of the workplace should never be accepted.”

Since their emergence in 2007, Bad Rabbits has lit up the stage with everyone from Kendrick Lamar, The Roots, Wu-Tang Clan, Steve Aoki, Common, Allen Stone and John Legend to Deftones, Passion Pit, Paramore, 311 and Taking Back Sunday and has embarked on several North American and international headlining tours which have included many festivals including Reading, Leeds, Wireless, Bestival, Roots Picnic, Boston Calling and Afropunk as well as the Vans Warped Tour. Touted by USA Today, Pitchfork, Interview, Vice, Spin, Huffington Post and more, their 2013 breakout album, American Love, landed at #1 on the iTunes Top R&B Albums Chart and Top 10 on the Billboard R&B Albums Chart and the Heatseekers Chart between a TV takeover that included performances on Jimmy Kimmel Live! and The Late Late Show with Craig Ferguson. 2016’s American Nightmare LP took a darker turn, siphoning their heavier influences through a fiery filter and becoming a fan favorite.

However, the boys consciously chose to amp up the sex, shine, and style in 2018…

“American Nightmare was very dark and serious rock,” Sheel goes on. “We were in a different place. We wanted it to be a cult record. Thankfully, it became that. Fast-forward a few years later, we’re home, we’re happy, and we aren’t burned out on the road anymore. It felt right to go back to those sexy parts. Fredua is not like a D’Angelo-style take-your-shirt-off R&B dude. He’s hilarious. This was about capturing our lighthearted side.”

“Mysterious” burns up the center of the dancefloor before breaking into a show-stopping chant. “Eyes On You” updates Riley’s new jack swing with a fresh fire, and “Dollars & Change” is all about flaunting “a smile on your face no matter how broke you are.”

“You could think of Mimi as the object of the narrator’s affection,” elaborates Fredua. “She’s sort of mythical and everywhere. She could be one of the girls on stage, as a hostess, or the club owner,” Fredua continues. “She’s always there in the scene somewhere though.”

In the end, this musical romp provides a welcome escape for listeners, courtesy of Bad Rabbits.

“There’s too much dark shit in the world,” Sheel leaves off. “We want people to lighten up, kick back, and enjoy this.”

“I want fans to have smiles on their faces from beginning to end - the minute they start the first track to the last track,” concludes Fredua. “It’s all positive vibes, even a song like F on the J.O.B. because justice is served. When you hear it, I hope you automatically want to dance or find your special person and have a good time. It’s a trigger for the party.”