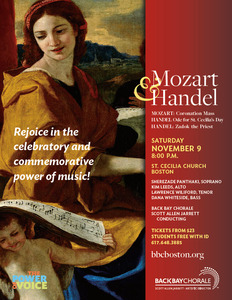 Join us for an invigorating musical feast with three triumphant choral works that celebrate the power of music. Uplifting music that's fit for royalty, from the masters of the baroque and classical periods.

GEORGE FREDERIC HANDEL
Zadok the Priest
One of the famous Coronation Anthems, this work has been performed at every British coronation since 1727 (King George II).

Ode for Saint Cecilia’s Day
On text of John Dryden, the Ode honors the patron saint of music with a glorious representation of music’s role (harmonia mundi) in the creation of the world.

WOLFGANG AMADEUS MOZART
Coronation Mass
Mozart’s first mass composed for the grandeur of the Salzburg Cathedral, this work is renowned for its vivacious spirit, and a soprano aria that foreshadows later operatic triumphs.  For many decades, it was performed at royal observances at the Imperial court of Vienna.

Students Free with Valid ID, discounts for seniors and children