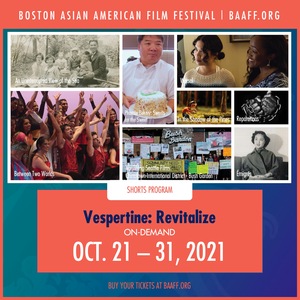 Our nighttime musings, vespertine dilemmas, and thoughts right before bed are our most sacred and intimate moments to overhaul everything we know. We reminisce about what is left unsaid to our families In the Shadow of the Pines or interrogate historical injustices in Reparations. Vespertine reclaims and redefines what we know and what we want for ourselves.

Phoenix Bakery: Sweets for the Sweet
Directed by Janet Chen
Documentary | 15 minutes
As Los Angeles Chinatown’s Phoenix Bakery celebrates its 80th anniversary, three multicultural generations of the Chan family explore their legacy and contemplate the bakery’s future in the community.

Reparations
Directed by Jon Osaki
Drama | 30 minutes | 13+ (Graphic images of slavery)
Black and Asian Americans explore the four-century struggle to seek repair and atonement for slavery in the United States – the inequities that persists, and the critical role that solidarity between communities has in acknowledging and addressing systemic racism in America.
Trailer: https://vimeo.com/531973252

WARSOL
Directed by Kayleb Lee
Drama | 15 minutes | 13+ (Strong Language)
In English and Lao with English subtitles
A combat veteran faces his traumas while attempting to reconcile the relationship with his father, a former child soldier of the Vietnam War, through therapy and family.

Émigrés
Directed by Betsy Tsai
Documentary | 14 minutes
In English and Chinese with English subtitles
A brief glimpse into how an immigrant family remains comfortably estranged and elusive of its history. The “why” might have gotten lost along the way.

An Uninterrupted View of the Sea
Directed by Mika Yatsuhashi
Experimental | 15 minutes
A Japanese American filmmaker tells the story of her family’s struggle to prove their American identities during World War II and the impact of her American identity today.
Trailer: https://vimeo.com/439376464

In the Shadow of the Pines
Directed by Anne Koizumi
Animated | 8 minutes | 13+ (Death themes)
In English and Japanese with English subtitles
Drawing on childhood memories, the filmmaker, explores her difficult relationship with her Japanese immigrant dad, who was also the janitor at her elementary school. The film explores the idea of shame and how it can shape and define us while also concealing who we can truly become.
Trailer: https://vimeo.com/451660439